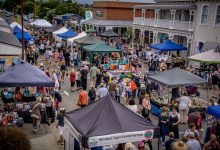 Midweek > Something for everyone

Once again, the Martinborough Fair went off without a hitch. Thousands of people flooded to Memorial Square on Saturday for the bi-annual event, which was launched in 1977. Rain held off, however, wind had some stallholders frantically holding down merchandise to keep... read more 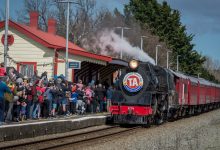 EMILY NORMAN It was definitely gumboots weather for those frolicking the fields at Middlerun for Carterton’s Daffodil Festival on Sunday. Thousands of people flocked to Carterton for the day, which started off wet, windy, and cold, but later transformed into a sunny... read more Test of speed and marksmanship

It was all about ‘load, lock and shoot’ for the 95 competitors at the North Island Practical Shooting championship at Gladstone on the weekend. The Wairarapa Pistol and Shooting Sports Club hosted what organiser Phil Dunlop thought was the biggest event of its kind... read more 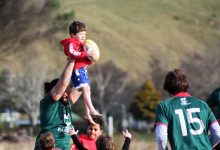 Piri Weepu picks up Nelson Bird from the East Coast Rippa team. PHOTO/KJ LIDDLE   BY EMILY NORMAN The Junior All Blacks rugby season has now ended, but the memories of mingling with former All Black Piri Weepu remains strong in the minds of young East Coast... read more 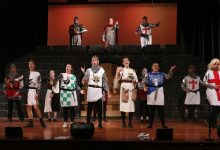 Life & Leisure > WaiCol on a quest

Knights of the Round Table. PHOTO/DANIELL MCCOY   EMILY NORMAN Budding Wairarapa College actors were on a quest for the Holy Grail last week as they wowed audiences with their performance of Spamalot. The musical, lovingly ripped off Monty Python and the Holy... read more

The weather was kind to participants for for the Pedal for Parkinson’s challenge yesterday. The event, part of the Huri Huri Bike Festival, helped raise money for Parkinson’s Wairarapa. Cyclists had an option of three tracks, 72km, 43km or the 15km hill climb. The... read more

By Chelsea Boyle chelsea.boyle@age.co.nz The ‘mouse house’ is up and spinning in the Kids Own Playground in Masterton. The mouse house is a tunnel-like piece of playground equipment that spins as people run inside – just like an oversized exercise wheel for mice. It... read more

Christmas lunch shared by many

By Emily Norman emily.norman@age.co.nz Happy faces filled the Masterton Memorial Stadium yesterday as bellies were filled with Christmas Lunch. The Room at the Inn Lunch, put on annually by the Masterton Community Church (MCC), served up hot vegies, meat, and pudding... read more
Next Page »