Player of the week: Peter Beech 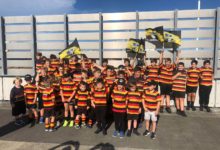 Junior rugby has enjoyed a revival this year. PHOTOS/FILE RUGBY CHRIS COGDALE chris.cogdale@age.co.nz Despite a 30 per cent drop in revenue, the Wairarapa-Bush Rugby Union reported a surplus of more than $24,000 at their annual general meeting on Monday night. Chief... read more Greytown make it two from two

Zac Guildford dives over for Greytown’s first try. PHOTOS/JADE CVETKOV RUGBY CHRIS COGDALE chris.cogdale@age.co.nz CARTERTON 21 GREYTOWN 32 Greytown coach Mark Childs was happy to walk away from Carterton with the five points but was left frustrated with their lack of... read more Chris Hemi [with ball] had a strong opening game for Greytown. PHOTO/FILE Anderson expecting Eketahuna to improve The battle between the two unbeaten town teams is sure to be a fiery feature match of the second round of the Lane Penn Trophy, writes CHRIS COGDALE.... read more Player of the week: Robbie Anderson Greytown too good for Pioneer

Rugby > Greytown too good for Pioneer Inia Katia has moved to Carterton from fierce rivals Gladstone. PHOTOS/FILE Club rugby’s back on menu Wairarapa-Bush club rugby kicks off this weekend with the first round of the Town and Country series for the Lane Penn Trophy. In a two-part series, Times-Age... read more
Next Page »