RACING CHRIS COGDALE chris.cogdale@age.co.nz Masterton Racing Club will celebrate 150 years of racing this weekend with a gala dinner and the running of the Masterton Jubilee Cup at Trentham on Saturday being the highlights. Tomorrow night’s jubilee dinner at... read more 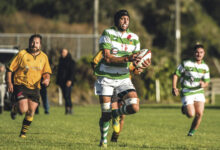 RUGBY CHRIS COGDALE chris.cogdale@age.co.nz Gladstone 21 Marist 41 Five tries in 11 minutes either side of halftime swung the game Marist’s way in an otherwise tight tussle at Gladstone. The home side led 14-0 after 23 minutes through tries to co-coach-prop,... read more Premier rugby about to get real

Rugby > Premier rugby about to get real Get your Sports Awards vote in

Sport > Get your Sports Awards vote in

Clendon’s rise is no surprise. PHOTO/FILE Jackson Clendon is turning heads with an outstanding class win at the Rally of Whangarei. CHRIS COGDALE caught up with the national championship leader. Jackson Clendon has been racing competitively for only three years and is... read more Wairarapa miss out on nationals

Sport > Wairarapa miss out on nationals