The wheels are turning for an entrepreneurial young Tinui woman who just last month launched her own ag services and dagging business.

Pearson was always interested in entering the field, having spent her early years on a large station.

After leaving school at the age of 16, she went on to study at Telford, just south of Balclutha, finishing with a Certificate of Agriculture.

She continued her learning, working on a Gore station for two years where she worked with sheep and beef, grain and deer.

“I worked for an amazing family down there,” she said.

“It was a really good experience and I loved it.”

From there, she was off to Perth, Australia for several months where she oversaw the shearing for 7000 merino ewes.

“That was one of the best jobs I’ve ever done. Once you get used to the heat and the flies, it’s a really good time,” she laughed.

She returned to Wairarapa after falling sick while on her overseas exchange in Europe and deciding to come home early. 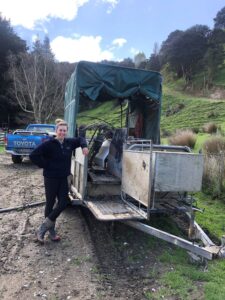 The couple opted to lease equipment to help keep costs down. PHOTO/SUPPLIED

It all worked out alright though.

She’s just finished working as a shepherd at Castlepoint Station to launch her own mobile crutching business, MJC Ag Services, with her fiance Jake Coulston.

It’s something they had talked about for a while, wanting to get ahead in the industry.

“Me and Jake had been talking about it for a bit,” she said.

“He was advancing quite quickly in his farming career [as a manager at a farm in Tinui].

“We decided to get our own dagging trailer and start our own business.”

Leaving Castlepoint Station where she helped with yard work, the day to day shifting of stock and mustering with her team of seven dogs, was bittersweet.

“I was excited to be starting my own thing but sad to be leaving. I really liked being part of the big team there.”

She said one of the biggest challenges of starting her own business, was adapting to the new way of working and being her own boss.

Other than that, setting up the business had been as daunting as some might imagine.

Rather than buying new equipment outright, the couple opted to lease it, helping to save on the cost of setting up.

“That was a really attractive part of our set up.

“It hasn’t cost us a lot. It’s the kind of business where you get more out of it then you put into it right at the start. You don’t have to wait.

The biggest expense was buying a new dagging plant which set them back about $1000.

Pearson attributed setting up the business to confidence inspired by working for people like Emily and Anders Crofoot and Jacques Reinhardt, the owners and manager at Castlepoint Station.

At a time when many in the industry have raised concerns about a shortage of youth in the agriculture sector, it was important for people to create opportunities for young people, she said.

She said involving younger workers in farm planning and setting a good example for how a young shepherd should be was important.

“Surround yourself with people that want to see you succeed.

“Work for people who don’t just see you as a tool in their business but as a person too. You’re not just there to do a job, you’re there to grow the business.

“There are people who are difficult to work with or put people in the wrong place, but there are lots of others who want to help young people.”

She’d had her own experiences with bad employers too and knows first-hand how difficult that could be for young shepherds.

“I had a tough time when I first started shepherding after Telford. I got treated really badly.

“Mentally that was really hard on me.” The business will focus on dagging but Pearson will also offer casual mustering services during quieter months. PHOTO/SUPPLIED

Pearson hoped to be able to return the favour some day and help other young people entering the industry.

“As a young person in the industry I’m really passionate. My ultimate dream would be to do something with young people.”

She said there were a lot of opportunities for people to start out and a range of roles they could learn from.

“There’s so much potential for young people in the ag industry.

The lifestyle and opportunity to work with both dogs and stock were what kept her going.

In the months where dagging was slower, Pearson would also offer casual mustering services as part of her business.