Resilience was what led to the success of young parents and students this year, which was acknowledged at Wairarapa Teen Parent Unit’s annual prizegiving on Wednesday.

Lockdown created challenges for many high school students, but for TPU students, homes became daycares as well as classrooms. Finding the time to be a student and mother during covid had been difficult, she said.

McRae joined TPU earlier this year, after her daughter Giovanna was born in September last year.

She described learning at the unit as “an eye-opener”.

“It’s opened up a lot of opportunities for me and my daughter to bring education into my life,” she said.

“It means moving forward with confidence. I have a future for me and her.”

Learning with other parents meant she felt supported and had a lot of advice readily available.

“I’m surrounded by mums and they’re in the same situation as me.”

Author and guest speaker Lauren Roche had her first child when she was 17 years old. She spoke of her life as a “G-string-wearing, fire-eating, pregnant teen stripper” turned doctor.

“Whatever you have done in your life, wherever you’ve found yourself, there’s always a way home,” she said.

Roche told the young parents that one of the most powerful things they could do was to read to their children, and to make sure children saw them reading. 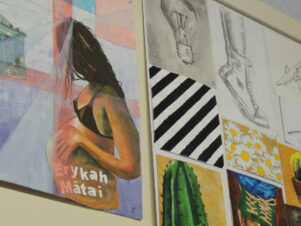 “Education gives you options, education helps you change,” she said.

“Your dream has to be big enough that it’s almost unbelievable.”

TPU manager Prue Smith said the unit had 22 students, six of whom were graduating this year.

“Being a student and a parent through a global pandemic created new challenges because they had a child and that had to be their number one priority, as it should be,” she said.

However, lockdown also provided a unique opportunity for students.

“It allowed us uninterrupted time to spend with our tamariki and whanau.”

For staff, teaching through lockdown became about “finding new and appropriate ways that we could engage them”.

“It was about what was doable,” Smith said.

TPU had one dad among its cohort.

Although it was not the first time it had had a dad as part of the mostly mum-filled unit, Smith said the diversity he brought was special.

“He shows that dads can be good parents too, not just mums.”