It is one of the first publicly visible developments of Pūkaha’s $4.5 million Environment and Ecology Education programme which includes the build of a learning centre, wharenui, accommodation and nocturnal boardwalk.

The whare whakairo was blessed by Māori kaumātua [elders], dignitaries, whanau, and Pūkaha staff in a private ‘light of dawn’ ceremony late last year which commemorated the new building and the significance for local Māori. 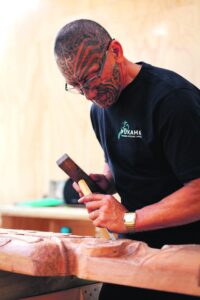 Three carvers; Tipene Kawana, Tamai Nicholson and Carl Rongonui; representing iwi Rangitāne, have been employed fulltime to produce traditional carvings for the wharenui, as well as carvings that represent important gods and ancestors throughout the reserve.

Final touches to the whare whakairo were completed in January and Pūkaha now extends a warm welcome to the community to come and see the new studio and observe whakairo [carvers] at work.

It will be open for public viewing six days a week, 9am-5pm from Monday to Saturday.

The development has significance for Rangitāne o Wairarapa and Rangitāne o Tamaki Nui a Rua, who jointly settled their treaty claim in 2016 including the return of the 942ha Pūkaha reserve.

The carving facility, carvings and the wharenui that they will adorn are an important and special way for mana whenua to be present and actively involved in the ongoing development and future of the reserve.

Rangitāne are planning to hold a ceremony to gift the Pūkaha reserve to the people of Aotearoa in May this year.

Visitors to Pūkaha will soon see the benefits of the whare whakairo on their visits as carvings that honour te taiao and te ao Māori begin to appear along the forest paths.

Lead carver Tipene Kawana said: “the taonga created from the whare whakairo will teach guests about the history and whakapapa of our lost crafts that we are starting to revive.”

“They’ll tell the stories of our atua [gods] and how they relate to the ngāhere [forest] and all the creatures that live here.”

“Pou [posts] will be placed in the ngāhere that are adorned with symbols and creations each relating to different aspects and origins of the ngāhere.

“They will tell stories about Pūkaha and our iwi that kaiarahi [tour guides] will be able to interpret so visitors can gain insights into our culture and people”.

General manager Emily Court said the development was important for the wildlife centre and long overdue.

“The carving team is already making such a difference to the Pūkaha experience – for staff, volunteers, and visitors alike,” she said.

“We are learning so much and gaining more of an understanding of how significant this place is to Māori .

“We are all on quite a journey of discovery. I really encourage locals to come and experience it for themselves.”