A tree crashed on to a house in Churchill Cres, Featherston. PHOTO/RITCHIE WARDS

A night full of ‘stupendous gusts’

Gusts of 130kmh caused damage all over Featherston and Greytown early Tuesday morning, including sending a tree through the cabin window of the first train out of Masterton as it came into Woodside injuring the driver.

The driver, Bruce Scott, was taken to Wairarapa Hospital with injuries, while his passengers disembarked and commuted by bus to Wellington.

The next two morning commuter trains were cancelled with limited buses being available.

Scott suffered cuts to his face.

“Part of my scalp is now glued together after all the glass was first picked out. I can’t believe I walked away from that, because that impact was at around 85-90kmh,” he said.

“And although it looked really bad, it was mostly just a lot of blood pouring out of minor scalp wounds, but I didn’t want to touch it because I knew there was a lot of pieces of glass in there.

“That tree literally blew over half-a-second before the locomotive smashed into it.

“By the time I worked out what had happened, the train was on the bridge, so I kept it moving and stopped the train at the platform at Woodside.”

On the Wairarapa Commuters’ Facebook page Bruce said: “I’ll be back in the saddle next Tuesday morning, hopefully without any more high-speed arguments with trees.

“I’ve hit a few trees over the years, but that is the first one that got even by getting me back.”

The driver of the next train, Dave Jones said, “Bruce is a tough fella. He did incredibly well bringing the train safely to a stop at Woodside, despite having a tree enter the cab through his window.”

Metservice had issued a strong wind warning in advance and they were right. Meteorologist Kyle Lee said that the strongest winds were from 2am to 6am, reaching 130kmh at Remutaka summit.

“The area had a very strong northwest wind preceding a cold front,” he said. “We have more mobile weather systems during spring months. The winds in the upper atmosphere are quite strong but this is a typical system.”

Power supplier, Transpower told the Times-Age that the early morning power outage across all three South Wairarapa towns was caused by a fault at the Bidwills’ Cutting substation just after 3am and was weather related.

“Our equipment tripped due to what we believe was debris flying through the yard and coming into contact with it,” communications manager Deborah Gray said.

“Once we had checked and cleared the equipment of any damage, we were able to restore supply.”

Power was restored by 5.37am, but line damage caused problems through the day.

Trees came down all over the place, McKenna said.

“We’ve had a lot of rain here recently, so the roots are in wet earth and more unstable,” he said, “It’s been non-stop here today.”

“It seems no one could sleep in the town on Monday night. Many of us are working from home today.

“When I went out for a look around, the fire trucks were on Churchill Crescent where a tree had come down on a house. This was the scene in many places around the town. “

The Metservice said the weather pattern has now changed and there is a ridge of high pressure and settled weather. 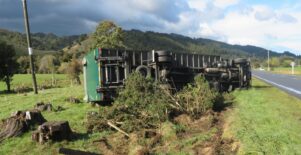 Strong winds may have caused a truck travelling on State Highway 2 near Mt Bruce to roll on its side on Wednesday.

The truck came off the road on to a grass verge before taking out part of a fence.

Its driver, the sole occupant, was uninjured.

A nearby farmer who saw the truck on its side said the morning had been very windy and the truck appeared to have been caught by a gust of wind.

The farmer had spoken to someone travelling behind the truck who said it had been travelling at a reduced speed due to the conditions.

Police and fire attended the crash which happened at around 8am.