Win and loss for both Farriers Dalefield sides Farriers Dalefield captain John Forsyth was thrilled that his inexperienced understrength team bagged the three points in a tough 2-1 victory over Harbour City at Clareville.

The two-time defending champions were without three key players for the game, which was a repeat of last year’s Wellington Premier Grand Final.

Inspirational Black Stick Dane Lett, and Jordan Cohen were both playing in the North-South series in Hamilton, while player-coach Benedict van Woerkom sat out the game having still not recovered fully from hip surgery.

“It was good to get off with a winning home game,” said Forsyth. 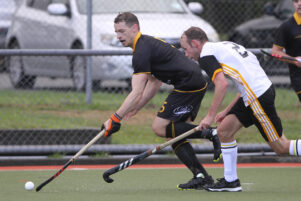 “There were a few new faces out there and it was pretty consistent with second round hockey, we’re still trying to figure out where the new faces fit.”

Harbour City started the better but couldn’t convert their chances, and the home team would have been happy to go to halftime at 0-0, with only strong defence and two outstanding saves by goalkeeper Forsyth preventing the visitors taking the lead.

“I’ve got to do the job, now that they’ve given me the armband, but it was good, and I love being out there with the boys and get the points.

“There were some good connections going on and a pretty strong defensive performance there too from the likes of Dan van Woerkom and Jayan Parbhu as well.”

Dalefield finally did get on the scoresheet in the third quarter, when Rowan Yeo converted their first penalty corner of the game. Marcus Ambrose doubled the lead with about four minutes to play with a screamer of a field goal from the edge of the circle.

Callum Slaven gave the visitors a glimmer of hope with a goal from a PC, but it was too late, and Dalefield held on for a hard fought three points.

“That second half the boys turned it around and started making those connections up the sidelines.

“It will be a different season this year, and we just need to make sure we’re going out there and doing the basics, and that’s what is going to win us the games especially against strong opponents.

“As those boys gain confidence and we figure out those connections, and who does what, some of those passes that you see go over the sidelines, in two or three games time there will be people on the end of those.” 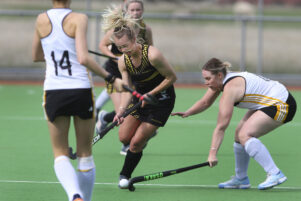 The third quarter proved decisive in Farriers Dalefield’s 3-5 defeat to Harbour City at Clareville on Saturday.

The scores were tied up at 1-1 after a first half where there were few opportunities for either team, but if anything, Harbour City had the better of possession and territory.

Dalefield were without two of their most influential players, player-coach Katherine van Woerkom and captain Michael O’Connor, and the younger players had to stay strong against the talented Harbour City outfit.

Having weathered the early pressure Dalefield took the lead when Charlize Baron, who was perfectly positioned at the far post, finished off a nice move started by Felicity Reidy.

The advantage was short-lived though as Victoria O’Keefe replied for Harbour City with a clinical finish.

The visitors took control four minutes into the third quarter when Estelle Macadre converted a stroke.

Rosie Rooderkirk levelled the scores against the run of play, but two goals from PCs gave Harbour City a 4-2 lead heading into the final quarter.

Maddie Taylor gave the home side a chance of a comeback in the first minute of the final period, scoring from Dalefield’s first PC of the match, but Harbour City sealed the victory with a goal to Grace Nancarrow from a PC.

Harbour City were the better team on the day and deserved winners, however, Dalefield’s stand-in coach Michael O’Connor said there were plenty of positives to take from the game.

“We stood up pretty well, considering we were missing some key players, and there were a lot of improvements from last week,” he said.

“The ball retention was better, and the passing was a lot better, although some of our first touches were a bit rough, and we gave away a bit too much possession, but it was quite positive, and by the end of the year we’ll be looking good.”

Both Dalefield teams will have next weekend off, with no games scheduled for Anzac Weekend.