The Colombo Rd courts are usually a hive of activity during netball season but it is unlikely to be so this year because of the covid-19 pandemic. PHOTOS/FILE

What will this year’s local netball season hold and where will it be played?

They are the two big questions confronting Netball Wairarapa staff and board members in the wake of the covid-19 pandemic and the national lockdown.

Netball Wairarapa traditionally start their season later than other codes – in early May after the April school holidays, and usually hold their finals in early-to-mid September.

Games are played throughout the week at the Trust House Netball Centre on Colombo Rd, with primary school grades on weekday afternoons, and adults’ competitions mainly on Saturdays.

However, that facility is being used by the Wairarapa DHB as an assessment centre for covid-19, potentially giving Netball Wairarapa another challenge – where to play their games.

Netball Wairarapa general manager Scott Cottier said that when the Wairarapa DHB approached them to use the venue as a possible site for the testing, they didn’t hesitate.

“The health and safety of everyone in this community should be at the highest priority for any organisation, no matter how much that may impact on your daily routine,” he said. 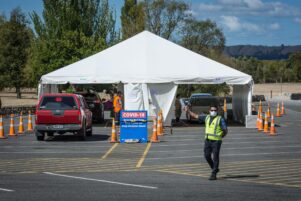 The Colombo Rd netball centre is now a testing station for covid-19 in Wairarapa.

“With the uncertainty of how long the DHB will require the Wairarapa Trust House Netball Centre, there may be a need to move some games to other locations within the region.

“This could be an option once there is a clearer picture of timelines.”

Cottier said a confirmed start date for the 2020 season was still no closer to being finalised.

“We are committed to our amazing netball community to try and deliver a competition this year for both senior and junior levels,” he said.

“At this stage, we are unsure what that may look like or if it will occur, but are working hard behind the scenes by creating different scenarios for each month that we can roll out, if or when an opportunity presents itself.

“We are mindful of the alert levels and what each category presents, so there may be restrictions if competitions do go ahead, to how it is conducted.”

On Sunday, New Zealand’s ﬁrst sports body to collapse, Mainland Netball, called in the liquidators but Cottier said on Monday that Netball Wairarapa were ﬁnancially sound and were pretty much self-sufficient.

However, he expected all sports would face a drop in funding and he was keen to see what the government’s funding support package would look like.

Cotter thought it would take about two years before sport fully recovered to pre-pandemic levels.