Whitebaiter Garry O’Dwyer setting up for a catch in October 2019. PHOTO/MARCUS ANSELM

The Government announced plans to tighten rules around whitebaiting on Tuesday, and they have been met with a mixed response.

Wairarapa residents have a chance to discuss the move in Masterton on February 10. Meetings across the country begin in Timaru on January 27, with consultation closing on March 2.

O’Dwyer said the government should regulate whitebaiting “the same as what they do for crayfish and paua”.

“I don’t think it’s necessary to charge for a licence, because you don’t have to pay for a licence for crayfish, paua, tuatuas, pipis.

“You’ve got to pay for duck shooting, and you have to pay for trout fishing but that’s because of restocking the animals, but the rest of it works on the same system.

“I don’t see why whitebait can’t be the same.”

Sage said several native whitebait species were in decline as she released proposals to standardise and improve management of the catch.

The proposals aim to standardise rules across New Zealand, including the timing of the fishing season and establishing upstream limits.

The new rules would be similar to existing standards on the South Island’s West Coast.

The proposed system would also create refuges in some waterways, or reaches of waterways, to provide safe havens for the six species to increase numbers and phase out exports.

Sage said whitebait “are a cherished part of Kiwi culture”.

“They are taonga to iwi and for some New Zealanders, fishing for whitebait is an annual tradition. These proposals aim to ensure whitebait numbers flourish now, and for future generations.”

There are no plans to introduce a licensing system for recreational fishers or ban the commercial sale.

Environmental organisation Forest and Bird said the proposals are “pitiful”, and “could be the final nail in the coffin” for the species.

“Rebuilding damaged and destroyed habitat for whitebait fish to grow up into thriving adult populations is the long-game,” Forest and Bird’s freshwater advocate Annabeth Cohen said.

“Basic fishing rules is what we need now, and they are long overdue. Whitebait regulations haven’t changed for over 20 years, meanwhile four of six whitebait fish species are in decline.

“Continuing to catch and sell these threatened animals, with no catch limits, licence or data, could be the final nail in the coffin.”

O’Dwyer gifts his catches at Lake Onoke to family and friends.

“I think the idea of catching it and giving it to people who can’t whitebait any more is a great idea. And it makes everybody happy.”

He said he had made a Christmas gift of one catch to his GP.

“The doctor’s looked after me pretty well, so I said, ‘blow it, I’ll give him a Christmas present’.

“Well, you’d have thought I’d given him a bloody gold watch! He said, ‘You wouldn’t believe it, my wife put a proposition to me that it would be lovely to get me some whitebait for Christmas, if we could’.

“And now I walk in with a pound of whitebait for him. He couldn’t get to the freezer quick enough!”

People can provide feedback on the whitebait management proposals over the next six weeks, either by written comments online or by mail, with recommendations expected later this year.

Visit the www.doc.govt.nz/whitebait-management web page to see more on the proposals, give feedback and for details of the public consultation meetings. 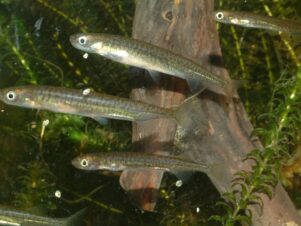 Adult inanga, one of the six whitebait species. PHOTO/SJAAN BOWIE

Whitebait are the juveniles of six species of native fish that grow into adults ranging from 10-60 centimetres long. Four of the six species are categorised as either threatened or at risk.

The shortjaw kokopu is ‘threatened’, while the giant kokopu, koaro and inanga are ‘at risk-declining’. The banded kokopu and smelt are not threatened.

Wairarapa is home to all six species of whitebait.