When we lost a man of great mana

Jo Mossman, left, Sandra McNab and David Lochore walk past the coffin of their father, Sir Brian Lochore, during his funeral service at Memorial Park on August 8 in Masterton. PHOTO/GETTY IMAGES

BJ’s funeral at Memorial Park, attracting more than 2000 mourners from sport, farming, industry and education, and his many Wairarapa friends, was testament to the mana of one of Wairarapa’s true greats. A true gentleman sorely missed by many.

Since starting in the role in March this year I’ve written about some outstanding victories, disappointing losses, and brilliant individual achievements. But now it’s time to dish out my awards
for 2019.

How do a team who fail to win a game, concede 88 goals in 18 games [minus 61 goal difference], escape relegation?

The Get in Behind Award

Whether it’s rounding up sheep on her Alfredton farm or whistling players into line on rugby fields in NZ and around the world, Rebecca Mahoney does it all in her composed relaxed style.

The first woman to referee a Ranfurly Shield challenge and a Mitre 10 Cup, will next year step up to an assistant referee’s role in Super Rugby.

The Watch This Space Award

The debacle around the governance and management of the Wairarapa Multi Sport Stadium Trust and the artificial turf at Memorial Park.

There’s a lot more to come from this story, so watch this space.

The ‘Sam and Sam Show’ for the Masterton Intermediate School First XI.

In March, Samuel Payne [129no] and Sam Jonas [116no] scored 271 runs in 20 overs in the Wairarapa final of the New Zealand Cricket National Primary Cup knockout tournament against Greytown Primary School. 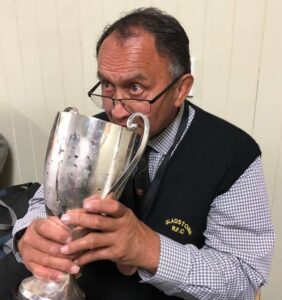 The Coach Speak of the Year Award

Gladstone premier rugby coach Steve Thompson has mastered the art of saying enough without really giving anything away at all. It comes from many, many years of practice in dealing with people like me.

The Keep it in the Family Award

The Tufuga brothers – Kirk, Ueta, Sam and Max – the first four brothers to play for the same team in a first-class rugby match since the Clarke brothers for Waikato in 1961. Also, joint winners of the ‘Humble Award’.

Cameo Of The Year Award

Hugo Delhommelle from Syracuse University only played four games for Wairarapa United but the Frenchman left a lasting impression before heading back to the United States. 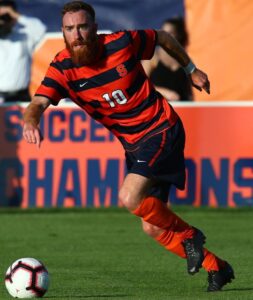 Hugo Delhomelle . . . cameo of the year for Wairarapa United. PHOTO/FILE

Delhommelle scored three scintillating goals from free kicks in two games, including a match-saving goal in the 95th minute for a 4-4 draw with Wellington United, which would prove pivotal in Wairarapa United’s survival in the Central League.

The Win of the Year

Wairarapa-Bush turning the Heartland Championship upside down with a brilliant 28-18 win over Wanganui in the opening round.

The Big Thank You Award

Jointly presented to all the coaches, players, managers, administrators, supporters and parents who have provided me with information and made my job a fair bit easier over the past nine months.

The Never Will Get Over It Award

OK, this isn’t local, but the Cricket World Cup final.

An unlucky ricochet, an umpiring blunder, a T20 factor – the Super Over – introduced to ODI cricket, and then a ridiculous countback of boundaries scored blighted probably the best game of sport played anywhere in the world this year.

With less than one per cent of ODI’s ending in ties [40 from about 4500 games] why couldn’t the trophy be shared?

Have a great Christmas and New Year.