What lies behind the mask Mask comes off the brave face

More than 20,000 New Zealanders have Inflammatory Bowel Disease [IBD]. But most people are oblivious because it is rarely spoken about and invisible to the naked eye. However, a Masterton artist is doing her part to unmask what living with a chronic disease really looks like, JOHN LAZO-RON reports. 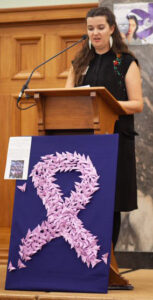 The world observed IBD Day on May 19.

‘Flares’ of the disease frequently involve emergency hospitalisation, and repeated, irreversible, surgeries to remove sections of the bowel.

New Zealand has one of the highest per-capita rates of IBD in the world.

It is growing at more than 5 per cent a year, making it the third-highest rate in the world.

Despite the severity of the disease, no one hears about it because no one speaks about it, due mainly to a lack of knowledge and understanding.

Masterton artist Katie Gracie is hoping her art work will shed some light on all of those issues, and show others what people with a chronic disease really go through.

Gracie was diagnosed with ulcerative colitis nine years ago.

Since then, IBD had hit her energy levels, diet, and how her body functioned as a whole, to take a turn for the worst.

She said, IBD was a persistent inside battle that not only affected you physically, but also mentally, with many who have it, putting on a brave face to hide what they were going through.

“No one wants to talk about their bowels,” she said.

“When this condition flares up, it can be relentless and exhausting, like having a continual tummy bug that doesn’t ease up. 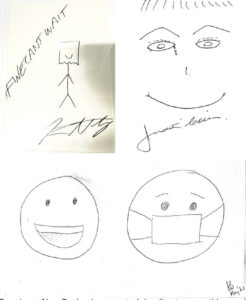 “Most people won’t even notice it though, because what people see in someone diagnosed with the disease is very different from what is actually happening ‘behind the scenes’.”

For five weeks, she worked on painting four bare mannequins – a little girl, a gentleman, a younger woman, and an elderly lady – who had happy healthy-looking masks attached to their faces. But once you took the masks off, what you would see was miserable sickly looking figures.

Gracie said the concept of the mannequins was to show there were numerous people with chronic diseases who wear ‘masks’ to hide their illnesses in everyday life.

Although fully behind the concept, Gracie admits painting the sick-looking mannequins initially felt weird because it went against her trade as an artist where she was trained to make things beautiful.

“It was a physical challenge because it felt against everything I’ve done,” she said.

“I found that quite confronting … to undo something. However, as I was doing it I was thinking about how I’ve felt like that myself. How I’ve looked terrible and then I go out and people don’t know that I’m sick.”

“I ended up finding it really therapeutic.” 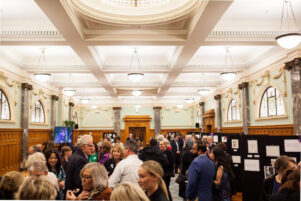 The ‘Unmasking IBD’ artistic installation was unveiled at the Grand Hall of Parliament on May 24.

The mannequins were eventually unveiled at the Grand Hall of Parliament on May 24, where prominent New Zealanders such as Ashley Bloomfield got in on the art act by creating doodles to go with the installation.

Wairarapa MP Kieran McAnulty was at the event and praised Gracie’s message through her mannequin artwork.

“The IBD event in Parliament was fantastic. I was proud to see the strong Wairarapa contingent there,” he said.

“Katie Gracie’s art installation really brought home the message that people whom suffer from IBD really do wear masks in public,” he said.

Since then, McAnulty has offered his ongoing support and advocacy for people with chronic illnesses.

“I think this is definitely something that needs more exposure and support. The more people become aware of it the better.”

‘Unmasking IBD’ would now be exhibited in several cities throughout New Zealand until the end of the year.