The Southey Sayer Wairarapa Korus blew a massive opportunity on Sunday to beat Wellington A in the Lower North Island quadrangular series.

After scoring 163 on a tricky Queen Elizabeth Park Oval pitch, the Korus had Wellington reeling at 69 for the loss of eight wickets in the 40-overs match, but a gutsy 55 not out by Antonia Hamilton got Wellington over the line with one wicket and three balls to spare.

Despite the loss, Korus coach Simon Roseingrave said there were some positives, with Olivia Clark a standout. 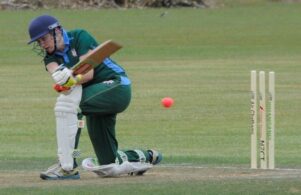 Olivia Clark starred with bat and ball in her second game for the Korus. PHOTO/SUPPLIED

“Olivia batted beautifully and then took two wickets with the first two balls that she bowled. She played very well in her second game for the team,” he said.

Clark top scored, with 44 [53 balls, including four fours] in the Korus’ innings, and combined with Ocean Bartlett [25] in an important 54-run fifth wicket partnership.

The Korus were fielding a young inexperienced team, with key players such as Melissa Hansen, Georgia Atkinson, and Monique Rees away with the Central Hinds, and Kate Sims and Hattie Vincent at university.

Roseingrave admitted the inexperience played a part in the loss.

“It was combination of a few factors. With a few young players in the team, the inexperience showed when the pressure came on,” he said.

“Our fielding got ragged. We probably let three or four fours through that we shouldn’t have and there were five or six overthrows.

“We thought the last two wickets would just happen and we waited, but they didn’t happen.

“We also probably left a few runs out there when we were batting. Some of our running between the wickets was pretty ordinary, so we left ourselves a bit short,” Roseingrave said.

However, it was usual opener Hamilton, batting at number seven, who stole the show for Wellington.

With pace bowler Hannah Kells [31], she added 76 for the ninth wicket, and then combined with Charlotte Leach to give Wellington a thrilling victory.

Medium pacer Ella Southey had the best return for the Korus, taking 3-28.

Taranaki beat Manawatu by 42 runs and are the only unbeaten team in the four-team competition with one round to play.

The Korus travel to New Plymouth to play Taranaki, and Wellington A will play Manawatu in the final round on March 15.