Walking in two worlds at station Scott Somerville and daughter Lizzie in the yards at Owahanga Station. PHOTOS/ROZ MASON.

Owahanga Station on the northern Wairarapa coast is a tough place to farm.

Wild deer, pigs and goats roam the hills and gorse is abundant and persistent.

They’re conditions that might defeat the spirits of many a farm manager, but not Scott Somerville, who manages Owahanga Station on behalf of its owner, Aohanga Incorporation. Somerville knows how to capitalise on the land’s charms and live with its challenges.

“You’ve got to work with the conditions you’ve got,” he said.

“It doesn’t pay to be too greedy. Overstock it and you can be in for a hard fall.

Instead he nurtures the soil carefully, bringing in a soil scientist to advise on his fertiliser regime and reinvesting the farm’s hard-won profits back into the land.

This year has the first topdressing flight using the station’s new airstrip, which Somerville said will pay for itself in its first year.

He has restored hundreds of gorse-covered hectares to productive pasture, which has allowed a big increase in stock numbers.

As the Maori incorporation’s employee, Somerville has about 2000 bosses, and the owners like what he’s doing.

It’s the third Maori-owned farm that he has managed as he likes their way of thinking.

“We’re kaitiaki [guardians] of the land,” he said.

“We’re only here for a short time but the land remains. It’s our job to leave it in a better state than how we found it.” 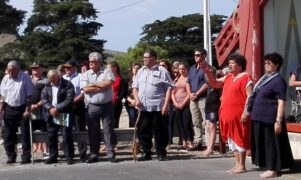 “The Maori view just fits with our ethos as a family,” she said.

Their family includes four children who have grown up in Maori communities.

Though they’re Pakeha, they’re completely at home on the marae they think of as their turangawaewae [home base].

Off the farm they live another life too.

Jodie is a high-level social worker and is studying for her masters degree in social work, living most weekdays with her parents in Masterton, two hours’ drive from the farm.

Their three daughters attend boarding school in town where they are involved in several sporting and cultural activities.

During their busiest periods, the womenfolk might not get home to Owahanga Station for weeks at a time, but they make it a priority to ensure the family has quality time together.

In summer, that means meeting every Wednesday afternoon in Masterton for waka ama training, tying together their country and townie, Maori and Pakeha lives.

But their best times are when the whole family is together at Owahanga Station and the children are happy helping draft lambs in the yards or gathering kai moana [seafood] at the beach.