Denise Clifton, with Sahara, said the bond between Bess and her rider would have been exceptionally strong. PHOTO/ESTHER BUNNING

Over the weekend we remember the tens of thousands of New Zealanders who have sacrificed and served during all wars, conflicts and peacekeeping missions.

Most often, we remember those who served during WWI in what was then believed to be the war to end all wars.

But it wasn’t just kiwi men and women who served during this time.

More than 10,000 horses were acquired by the New Zealand Government from 1914 to 1916 for the war effort – only four returned to their homes, including one lucky horse from Martinborough named Bess.

Bred by A. D. McMaster of Matawhero in 1910, she spent her early years in the rolling countryside of Martinborough before being gifted to the New Zealand Army.

The four-year-old black thoroughbred was allocated to the Wellington Mounted Rifles Regiment and selected by Captain Charles Guy Powles, who named her Bess. Bess, one of only four service WWI horses to return to New Zealand, in Sinai in 1916. PHOTO/FILE

She was one several thousand riding horses that served with New Zealand’s mounted forces in Sinai and Palestine.

Making it through the four years of conflict was a miracle – a perilous and long journey to the Middle East, the high risk of being killed in action or dying of disease, little water and feed, and extreme weather conditions.

Powles had previously served in the South African War, and became brigade major to the New Zealand Mounted Rifles Brigade during WWI.

The pair served in both the Sinai Campaign of 1916 and the Palestine campaign of 1917–18 before joining the New Zealand division in France.

At the end of the war an acute shortage of transport, and quarantine restrictions related to animal diseases prevalent overseas, prevented most horses from returning.

Bess was one of few horses on the Western Front who was repatriated to England. Horses which had served in the Middle East were pooled with other British army horses – the fittest were initially kept to be sold locally, while those deemed unfit were killed.

In March 1919 she arrived in England where she spent 12 months in quarantine before returning to New Zealand in July 1920.

She continued to serve Powles upon their return where he served as a commander at Trentham and later as headmaster at Flock House, an agricultural training school for dependants of war veterans.

She produced several foals before dying in 1934.

The keen bond developed between rider and horse during such trying circumstances, is something which Eketahuna woman Denise Clifton greatly admires. 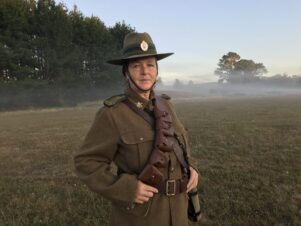 Denise Clifton was one of six riders who would represent Eketahuna. PHOTO/TERRY HANN

“Anybody who has ridden a horse will know you have 600kg of pure muscle underneath you which you are trying to control,” she said.

“Their bond would have been exceptional.

“For me the idea of going to war with your horse, creating that bond that carried you through hell, and then not to be able to bring them home would be absolutely devastating.”

Prior to the lockdown and event restrictions, Clifton had been planning to take part in the ANZAC Mounted Troopers commemorative ride between Eketahuna and the ANZAC Memorial Bridge at Kaiparoro.

The Eketahuna Museum team would have hosted members of the ANZAC mounted troopers from North Canterbury for one week.

Twelve riders, six representing Eketahuna and six from the Amuri Mounted Rifles troop [in Canterbury], would have made the journey from the town service to later stand as honour guard at the bridge service.

Clifton felt it was only the last 10 or so years that the role of animals, particularly horses, was better represented and reflected on.

“That’s one of the reasons we are doing this ride, to acknowledge the role of horses in the war,” she said. “The Eketahuna Mounted Rifles had quite a role to play and we wanted to acknowledge them because they hadn’t been before.”

The area had a long association with horses which served, dating back to the Boer War.

About 70 local men signed up and applied for their own unit.

“Some of them that applied were, like their horses, almost too wild for service,” she laughed.

They eventually did get their own unit before it was amalgamated into the Wellington Regiment as C squadron, where a huge number lost their lives, she said.

“It was left to the women, older men and children to carry on.

“When I think about it for this area, there wouldn’t have been many horses and they would have been very valuable to a farm.

“They would have been the horse that carted the cream to town to sell, or the horse to work the land.”

Horses had played an important role throughout history and she hoped to better commemorate their service through the ride.

While she was gutted it wouldn’t be able to go ahead on Saturday, she hoped they would be able to complete the ride on Armistice Day instead. 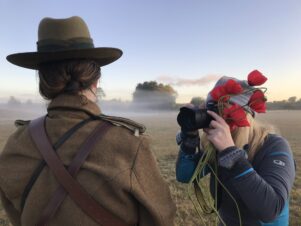 These photos were taken by Greytown-based photographic artist Esther Bunning, who was awarded the NZ Pacific Studio 2020 ANZAC Bridge Fellowship.

Supported by Trust House, the fellowship supports artists to create an ANZAC-related project that engages the community.

“The stories of the horses that went to war are timeless,” she said. “I believe that we can always learn from these beautiful animals.”

Bunning created large fabric banners which reflect the movement and energy of the horses, her photographs paired with writing from children at the Mauriceville School.

The project would still go ahead but would be unveiled at a later date.