Flavoursome oil from four Wairarapa olive groves hit the top of the scale on the weekend, winning four categories of the New Zealand Olive Oil Awards 2020. 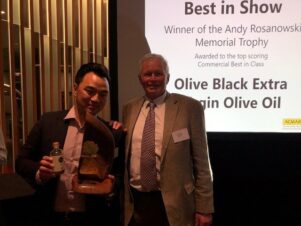 Olive Black manager Mark Bunny has been producing oil for 10 years and this winning oil was from olive trees in Featherston.

This year, Bunny decided to mix up his virgin oils.

When tasting the oil from his four varieties, he found each to have a special flavour and decided to mix them together.

“I thought, hey, that tastes all right,” Bunny said.

“I couldn’t believe it when the awards kept coming.

“We won a gold and then Best in Class and that was fine and then I thought, holy smoke we’ve won the top award, this is great.”

Bunny owns the olive grove, but Auckland-based Richard Lee owns the product and works on the marketing and sales of the oil. Bunny owned Loopline Olives until a few years ago when he sold it to Stephen Davies Howard, whose Picual virgin olive oil won overall runner-up in the competition.

Both men said the Wairarapa climate was the x-factor that brought complexity to the region’s oil.

“The stress of high and low temperatures seems to bring out flavours,” Bunny said.

Olive Black and Loopline Olives get their olives pressed at Greytown Olive Press run by Rob and Katrina Lingard.

Owner of Loopline Olives Stephen Davies Howard engages olive harvester Andrew Priddle to care for the trees and crop. But he is involved in decisions about the harvest.

“A great olive oil has a lot to do with the climate but even more to do with harvesting and pressing at the right time,” Davies Howard said.

“We talk about the fruit a lot, and we touch it and squeeze it to get an idea of the water and juice levels.

“You can make bad oil from good fruit if you get it wrong.

“We had a low yield last year because of the drought, but we got the oil right and that is what matters.”

He said frost and starlings were the enemies of the trees but otherwise he just kept the area under the trees clear to keep bugs away.

To help with his ‘nose’ for good oil, last year he went to San Francisco to gain the Olive Oil Sommelier Certification. 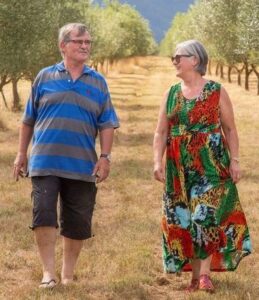 Winners of the Boutique Intense Single Varietal category Karen and Ian Juno planted about 2000 trees in Greytown 20 years ago.

Being of Lebanese descent, Karen Juno said olives were in her blood.

She said, along with the climate, the stony, free draining soil was what the olives liked.

“The trees don’t like wet feet and what we are getting here is intense, flavoursome oil,” she said.

“I really feel the intense flavour of our olive oils makes the food taste organic. I am even putting it in my cakes now.”

She said Wairarapa was not a large olive growing area such as Hawke’s Bay or Marlborough but was taking away the most awards.

Juno Olives does not use chemicals on the grove and leave the sheep to do much of the tidying up below the trees.

“They are little lawn mowers and the sheep poo is good fertiliser.” But she said it was important to prune well to make sure fruit production was high, and enough light was getting in around the tree.

Craig Leaf-Wright said they were extra pleased with the gold medals they had won and the overall award because it was the first time they had pressed their olives on their own press.

“We just feel so good to be on the right track,” Craig Leaf-Wright said.

Wairarapa producers had more than a dozen award winners in different categories.