Wairarapa’s a house of science What do skeletons, bouncy balls and red cabbages have in common?

They’re all part of the new House of Science blue boxes making their way into schools across Wairarapa.

Educators got the chance to see the programme’s famed boxes for themselves and try out some of the experiments. General manager Amanda Taylor, who has a doctorate in molecular medicine and is credited with making it the fastest House of Science launch so far, said the success was largely down to “an incredible group of volunteers”.

These include principals and teachers, who collect and deliver the distinctive blue boxes, and who help restock them for distribution to more schools.

“I saw so many kids coming into high school and saying they had never done science,” she said. “By the time kids are 13, it’s practically too late.”

The lack of exposure to science education was shown by the statistics: according to Ministry of Education data, 80 per cent of primary pupils are below the expected learning level – making it the country’s worst subject.

The biggest obstacle to meaningful science teaching for schools was the cost of science resources, most of which spend the majority of their life in a cupboard.

While urban schools often engage in resource sharing and off-site classes, these are infrequent, and much harder to access in rural areas.

With its long history of supporting rural education and strong relationship with schools across the region, REAP Wairarapa provided support to the House of Science Wairarapa board, with schools liaison Trudy Sears
serving as a member. 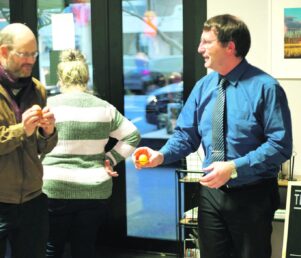 A charitable trust, House of Science Wairarapa, relies on a mixture of grants and business sponsorship as well as a small contribution from schools to cover its costs.

The House of Science project is closely aligned not only with the NZ Curriculum and Ministry of Education National Education Goals, but also with the Ministry of Primary Industry’s science roadmap – te ao turoa – in meeting the future needs of the New Zealand economy, so Duggan was confident that government funding would come.

House of Science kits contain everything from LEGO bricks to red cabbages, model skeletons to bouncy balls – and the instructions for every experiment are provided in both English and Te Reo Maori on the same card.

Of the over 300 schools accessing House of Science boxes, 10 per cent are Kura Kaupapa Maori, and many of the experiments link to the myths, legends and discoveries of Maori scientists.

The modules cover all the key areas of science learning, including chemistry and physics, while also approaching new and important questions, including finding alternative protein sources to feed a growing population.

The kit for that topic even includes a box of crickets for pupils to sample.

Blue boxes are booked through the House of Science website, and since July 2019 they have been distributed across South Wairarapa, but are expected to be in Masterton schools from term 1, next year, and the Tararua district after that.