There were mixed results for Wairarapa in their annual fixture against Kapiti Coast at Paraparaumu Beach on Sunday.

Two teams – Green, and Red – were named for the traditional singles, pairs, and fours disciplines, and the selectors Lester Dee and Tanya Wheeler varied the combinations for the 2-4-2 games.

Mark O’Brien and veteran Warren Fisher [a late replacement for Steve Willis], and Aaron Love and Darren Meyrick were the only winning men’s combinations after the morning’s play. Still, Wairarapa went on to dominate the afternoon’s games, losing only one game.

In the singles, Scott Mackenzie impressed in holding off a strong challenge from Rhys Hakkens to win 21-18, and Matthew Day, who made the last 16 at last season’s national championships, defeated Kiro Rokotakala 21-15.

The Martinborough combination of Aaron Love and O’Brien were comfortable winners of their pairs clash 20-11, likewise, Fisher and Meyrick easily won 21-11.

The drama came in the fours, where the Green team of Gary Muriwai [skip], Clint Carroll, Bill Brunenburg, and Gavin Hamlyn came from trailing on the penultimate end to win 17-16.

Brunenburg was the hero, putting the kitty into the ditch with the second-to-last bowl to take five shots from that end.

The only team to fail to fire were the Red team four of Peter Ireland [skip], Stuart Campbell, Hayden Frew, and Dean Hands, who went down 11-18. 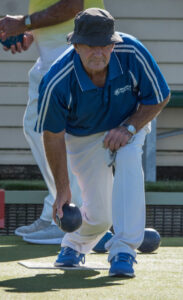 Warren Fisher impressed as a late replacement, winning both his matches.

Dee was happy with the effort from the team after a slow start to the day.

He said he was impressed with both teams, and the result bodes well for the future representative fixtures in the new year.

On the scoreboard, the women were well beaten throughout the day, but there were two draws and two one-shot losses to give Wheeler some encouragement.

Makaia Campbell and Helen Baker, with a comfortable 25-9 victory, and Wheeler and Tracey Jacobson, with a 17-16 win, were the only victors in the 2-4-2 format, with Elaine Hemi and Mary-Ann Wilson forcing a 15-15 draw.

Rozanna Muriwai was the only Wairarapa winner in the afternoon’s play, edging out Jane Selby Paterson 21-20. The four of Dale Rowe [skip], Wilson, Maryanne Ashworth, and Jacobson held on for a 12-12 draw.

The Wheeler skipped four were pipped 13-14, and the pair of Baker and Leah Mackenzie went down 14-15.

The next outing for the men’s and women’s teams will be the Lower North Island quadrangular tournament in late January.