Primary group Nga Puawai o Te Kura Kaupapa Maori o Wairarapa have made it to nationals, in Hamilton, in November, for the second time. PHOTOS/SUPPLIED

History made as region represented at all three levels at nationals

Kapa haka is on a real high in Wairarapa, with groups from all three levels – primary school, secondary school and adult – reaching the national finals for the first time. 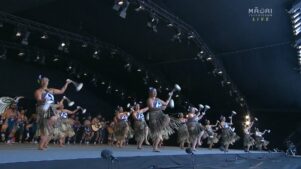 Adult group Te Rangiura o Wairarapa made it to the nationals in February for the first time in more than 20 years.

When numbers were not enough to fill the group, it was opened up to all secondary pupils in Wairarapa and now features pupils from Te Kura Kaupapa Maori o Wairarapa, and Makoura, Chanel, Wairarapa, Kuranui, and Rathkeale colleges.

The hours put in by the pupils, tutor Shari Taylor and younger members of adult group Te Rangiura o Wairarapa, who helped out, paid off with the great result.

In February, Te Rangiura o Wairarapa made it to nationals for the first time in more than 20 years, competing at Te Matatini ki te Ao, the biennial national adult kapa haka festival, held at Westpac Stadium in Wellington, attended by more than 60,000 people over four days.

The team’s success had them place higher than others from the region. They finished 21st in the elite 46 group competition.

Regionals were held in Masterton in August last year, with Nga Puawai o Te Kura Kaupapa Maori o Wairarapa making it through the tough competition to nationals for the second time. Secondary school group Wairarapa Ki Uta Wairarapa Ki Tai were all smiles after coming second at regionals and earning a place at the national competition.

Many kapa haka performers in Wairarapa start in the primary group, and continue through secondary and on to the adult group.

For years, the tutors for the adult kapa haka came from outside the region, but after a focus on a succession plan, the tutors for each group are now from Wairarapa and often part of one of the other groups.

Lily Ann Arahanga is involved in all three groups, as the primary tutor, secondary administrator, and adult performer.

She says they are always looking for new blood.

The groups have talented composers and proficient te reo speakers who have written “beautiful” waiata, she says.

They create stories and transform them into performances.

The group leaders say it is all about teaching, learning and spreading te reo.

The groups want others to know that kapa haka is a great way for people to learn te reo.

“What better way than through singing?” Arahanga said.

Te Rangiura o Wairarapa will be holding a muster for all interested newcomers on August 31, 10am-4pm, at Te Kura Kaupapa Maori o Wairarapa.