Tributes are flowing for one of the hard men of Wairarapa sport from the 1950s and 60s.

The centre-forward was a vital player in the team who finished fifth at the 1960 Rome Olympics.

He also represented Wairarapa in cricket and basketball. 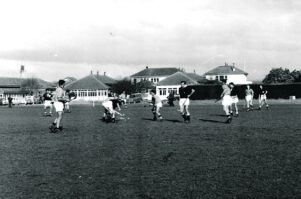 Kevin Percy, third from right, playing on the old hockey grounds in front of Masterton Hospital.

It was on the hockey field where Percy gained his reputation as an enforcer – particularly at the Rome Olympics.

New Zealand missed out on the semifinals when Spain scored the winning goal three minutes from the end of extra time.

In the playoff for fifth and sixth against Australia, Percy made the crucial pass to left-wing Phil Bygrave to score the only goal of the game.

Coach Bruce Turner then gave him the job of taking the Aussies’ minds off the game in defence of their lead.

Percy later said that he must have fulfilled his role to perfection as only one Australian shook his hand at the end of the game.

Percy also said that the Australian coach, Charlie Morley, issued instructions to counter him, telling his team: “If that bushwacker centre-forward walks off the field, you guys are in for it.”

Percy’s son, Cameron, told the Times-Age his father’s hard man reputation was totally different from the impression he made when he first played sport as a child.

“His father took him along to rugby and commented that he’d ‘never seen such a gutless bastard in his life’, so his mother took him on the back of her bike to hockey.”

Illness probably robbed his father a place in the 1956 team for the Melbourne Olympics, Cameron said. 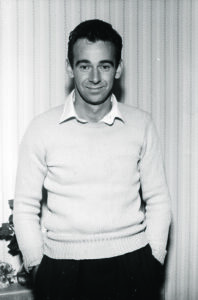 On his return from the Rome Olympics in 1960.

Percy was great mates with another Wairarapa hockey great, Bill Schaefer, who represented New Zealand in the 1956, 1960, and 1964 Olympics, and was rated by other international teams as the best goalkeeper in the world.

Cameron said his father also had an eye for a deal.

“When they went to India on one tour, his mother gave him some money, so he bought some Roamer watches, which were popular in India.

“The heads of Indian hockey at the time were also the heads of customs and police, and they told the team if they brought in milk powder, which was sought after in India, they could get away with anything.

“He put the watches on his arm under his sleeve and then went to sell them at a local shop.

“News got out and he was soon being chased by a local mob. He got away and when he got home, he gave all the money to his mum.”

Percy played for the Kiwi Hockey Club and was later instrumental in the establishment of the Red Star Hockey Club.

He also coached Wairarapa periodically in the later years of his playing career.

Percy was a talented cricketer who represented Wairarapa and was considered unlucky by many not to play for Central Districts.

A hard-hitting batsman, Percy held the record for the highest club score of 255, until that was surpassed by his Red Star teammate, Rex Davies.

He was described as a prolific run scorer, with a brilliant eye, and an unbelievable gully fielder.

Cameron said records were scarce and he wasn’t sure how long or how many games he played.

Percy moved to Napier in 1977 where he ran an antique shop.