Wairarapa all for organics Dry River in Martinborough was established in 1979. PHOTO/RICHARD BRIMER

New Zealand’s national Organic Week, held from May 9 to 17 this year, is the country’s largest celebration of organic producers who do not use of chemical fertilisers, pesticides, or other artificial chemicals. GIANINA SCHWANECKE talks to some of the region’s organic growers about why they chose to farm this way and their experiences.

Established in 1979, Dry River Wines is an apt name for the vineyard which is characterised by arid, free-draining soils north of Martinborough.

The winery was just thinking about making the move to organic growing when winemaker Wilco Lam started in 2009. 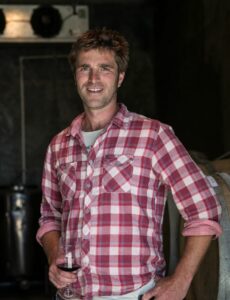 Almost 10 years on from making the transition, he said the winery had just finished a fantastic harvest season.

The fruit for Dry River wines is grown and harvested on three blocks – Dry River, Craighall and Lovat.

Prior to growing organic, the vineyard had already eliminated the use of pesticides but still had to learn go without herbicides.

Lam said he was especially impressed that his team of six had single-handedly brought in this year’s harvest owing to worker shortages.

While proud of the wine he produces, wine doesn’t have to be organic to taste good.

For Lam, growing organic is about the “feel good factor”.

“Anyone who drinks organic wine or eats organic food can feel really good about the processes which went into making it.”

Consumers were increasingly interested in organic products which in turn drove producers, he said.

“More producers are open to it, especially here in Wairarapa.

“The consumers more and more aware of the possibilities and the wines are grown organically.”

The premium price producers can charge was an added incentive for many, though Lam said this didn’t impact their pricing other than for the quality of wines produced.

For Carterton dairy farmer Ray Craig, the premium offered for organic products was what initially drew him in. He has a long association with the dairy industry, with parents who farmed and milked cows in Greytown for many years.

Three years ago he made the moved to organic dairy farming and gained certification last September.

“We had a really low payout one year – about $3.90 per kilo. We couldn’t stay in business if we had too many of those.

“We wanted to do something that would make our product a bit niche and different.

“It’s a premium product and we are rewarded for our efforts.”

It was a low risk change in terms of cost.

“It’s about doing things differently and being more proactive.

“We are a lot more cautious about feed because you can’t just ring up the fertiliser company or buy in grain.”

Animal health was also challenging at first though there were a growing number of resources available as the practice became more common.

Moving to organic farming also went hand in hand with Craig’s efforts to improve the environment.

“The more we do it, the more we understand the relationship between livestock and the soil and the plants and how that ecosystem works.”

This included the introduction of dung beetles to the property in 2016 to help improve water quality, and the mixed-planting of sunflower and maize as feed. 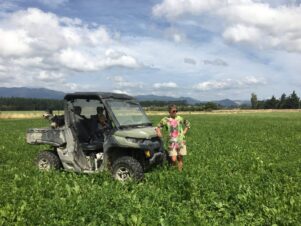 Mixed-cropping is a feature of both organic farming and regenerative agriculture practices at Heather Atkinson’s farm in Pirinoa. PHOTO/SUPPLIED

“By the very nature of organics we have been operating regenerative farming practices on our farm for more than 20 years.”

She and her late husband Ian, converted their 250-hectare farm in Pirinoa to organics in 1998.

The mixed-pastoral property runs a bit of everything – sheep, beef, deer, dairy support and some cropping.

“We were in the food production business and wanted to produce food that was safe from things we didn’t want to feed our own families,” she explained.

She said while it was good to marry their personal values with a good business choice for their farm, being early adopters had been challenging.

Information about organics wasn’t as readily available and there weren’t the same rural connections or support to draw on.

Support products and alternatives were also hard to come by which meant the Atkinson’s often made things themselves.

“It was hard back then. It’s a lot easier now.

“These days you can get organic health supplements or minerals.”

She said there was also more interest in organic practices these days.

“There’s a real receptiveness to do things a bit better in terms of environmental performance.”

The next generation was “nailing it”.

The couple’s daughter Sophie has since taken over the family farm, which she has been running for about three years.