Wai-Bush out to right 35-year-old ‘injustice’ All Black Andy Haden, centre, is flanked by Maurice Colclough, left, and Steve Bainbridge, right of the British Lions during the fourth test at Eden Park on July 16, 1983. New Zealand won 38-6. PHOTO/GETTY IMAGES

A near-capacity crowd turned out on that cold wintry Tuesday afternoon, and braved a strong southerly, persistent rain, and occasional snow flurries, as the country boys took on the All Blacks-laden city slickers. 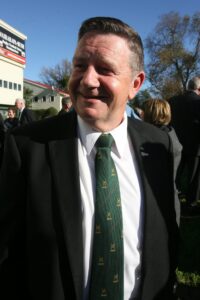 A 2014 photo of Mark Benton, who kicked two penalties against Auckland in 1985. PHOTO/FILE

Mark Benton kicked the only points for the home side. The only try was controversial to say the least, with Auckland flanker Mark Brooke-Cowden scoring from a 10m forward pass.

As more than one player from that Wai-Bush team have stated, Auckland captain Andy Haden did a superb job ‘refereeing’ the game, as the official whistle blower, Ken Beckett, struggled to see through his rain-splattered glasses.

Wai-Bush went on to finish fourth in the NPC first division that year, memorably beating Canterbury, Otago, and Wellington in a last-gasp 20-19 win with Mark Benton converting Mike Foster’s try on fulltime.

But there were no semifinals in those days, and Auckland remained the only province that Wai-Bush didn’t beat in their six seasons in the first division.

Now Wai-Bush chief executive officer Tony Hargood wants to right a wrong by taking on Auckland in a virtual game of rugby.

“At the last minute, Auckland rang and said ‘Yes’ to our request,” Hargood said.

“Auckland will name their team from their 1985 squad to take the field against Wai-Bush but said it must be played at Eden Park,” he said.

“Auckland said they are so confident of winning the semifinal that we can name our best team from all of our 728 players since amalgamation in 1971 and we can bring our own referee and touch judges.”

Hargood is calling on all Wai-Bush supporters to have a bit of fun and see how their 23 players match up against the “official” team.

Each day over this week, the Times-Age will display a shortlist of players for each position.

The final selections will be announced shortly before kick-off at 2.30pm on Sunday.

The game will be “screened” live on the Wai-Bush Facebook page.

To kick off the selection process the shortlisted front rowers are: