Take the five points and move on.

That’s the attitude of Farriers Wairarapa-Bush coach Joe Harwood after their hard-fought 37-31 win over King Country at Trust House Memorial Park on Saturday.

The home side dominated long periods of the game and should have won by more than the six points, but taking their foot off the throat and making silly mistakes when King Country were down to 14 men, and 13 for a stage, almost cost Wai-Bush victory.

The green and reds took an early lead when wing Tristan Flutey scored after 90 seconds after a couple of line breaks by first-five Tipene Haira and a blindside bust by fullback Inia Katia.

Haira added a penalty and Flutey was in for his second five-pointer after 10 minutes.

Haira was again instrumental with a beautiful pass to put centre Ueta Tufuga into space.

Katia carried the movement on, giving a nice flick pass to flanker Johan van Vliet, who drew the last defender and sent Flutey on a 25m run to the tryline.

King Country were next to score in their first foray into the Wai-Bush 22.

A series of attacking scrums led to big second-five Brad Armstrong crashing over handy to the posts.

The impressive van Vliet was next to dot down when he latched on to a wayward King Country lineout throw, shrugged off three or four tackles, including a head high, to make the score 20-7 after 18 minutes.

The visitors narrowed the lead to six points, when No 8 Chulainn Mabbett-Sowerby brushed off two soft tackles to stroll in under the posts.

Wai-Bush showed their attacking prowess to score their bonus point try after 28 minutes. Blindside flanker Sam Shaw got the forward momentum with a powerful surging run.

From the ensuing back move Ueta Tufuga found the gap and ran 20m to score and a 25-14 halftime lead.

The home side should have put the game to bed, with three sin binnings on either side of halftime.

King Country captain Carl Carmichael was first to go after a lineout skirmish just before the interval.

Shortly after Carmichael’s return to the field replacement prop Charlie Henare was yellow carded for a dangerous tackle.

Centre Alefosio Tapili soon joined Henare on the sideline for killing the ball in front of the posts.

Wai-Bush could not make their numerical advantage count, with silly mistakes such as poor lineout throws, wayward passes and knock-ons costing scoring opportunities.

It was the visitors, down to 13 men, who lifted their game.

Replacement wing Alex Thrupp used his power and pace to run 20m, with little room to work in, and score a superb try to narrow the score to 25-19.

Then King Country, with still only 14 players, took the lead when lock Josh Balme scored from a 5m lineout drive.

That was the spur that ignited Wai-Bush.

A beautiful break down the touchline by Ueta Tufuga led to replacement flanker BJ Campbell scoring wideout after 66 minutes.

Campbell was in for his second try five minutes later.

A pinpoint cross kick from substitute first-five Tim Priest was superbly controlled by hooker Bruce Kauika-Petersen, who in-passed to Campbell to score. Priest’s conversion made the score 37-26 with eight minutes
to play.

King Country gave themselves a chance to snatch the game at the death when they took advantage of a wayward kick by Priest for wing Tayne Tupaeato to score wide out. 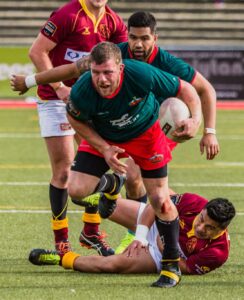 Johan van Vliet beats the defence on the way to the tryline.

For the home side, van Vliet continued his brilliant start to the championship.

His tackle rate was high, as always, he forced several breakdown turnovers, and he proved difficult to bring down with ball in hand.

Katia was his usual evasive self and had a hand in many of Wai-Bush’ s attacking moves.

Second-five Brock Price made the most of his chance to start.

He commanded the kick-offs, taking at least three or four on the full.

He was solid on defence and his powerful running tested the opposition defence.

The tight five generally had the better of the scrums and second phase, however, lineouts were a concern, with too many throws failing to find their target.

Coach Harwood was relieved to get the win and move on.

“We’ll take the five points any day of the week. Look they fed off our mistakes, we gave them soft tries out there, which was a disappointing thing.”

“We scored some nice tries, built some good pressure, just patience let us down,” Harwood said.

“We had scrums under the posts and as soon as one guy takes his foot off the throttle then it upsets everything else and that was a crucial point of the game and we should’ve put points on them then.”

Harwood was impressed with some of the players who got their first start of the season.

“I was stoked for Brock [Price]. He’s taken over from [injured captain James] Goodger chasing our kickoffs, he carried well, and he just needed a few other boys around to put their hand up as well.”

“I thought those old boys in the middle, Husky [Brent Wilson] and Sass [Andrew McLean], did extremely well in their roles too.”

Harwood said there were plenty of positives.

“Every time you score five plus tries and get that bonus point is good. We move on to Poverty Bay next week and it doesn’t get any easier.”

What the players said

“We made it hard on ourselves. We got the lead and were aggressive from the get-go but little errors let them back into the game in the second half.

“I thought that we’d get up, when they had numbers down. They must’ve lifted and we took a step backwards and just couldn’t finish our opportunities.

“We were parked in their 22 for about 10 minutes or so and just couldn’t get over. But a win’s a win and we’ll take that.”

Price had an outstanding game at second-five.

“We went to sleep for a little bit in the second half, but we came back in the end and there were heaps of positives.”

“On attacking the kickoffs: “Someone’s got to take over from [James] Goodger, since he’s gone, so I put my hand up and it paid off in the end.”

Wilson made his debut at 37 years of age.

“It felt good. I really enjoyed it. Obviously, a bit rusty in putting the boots back on.

“I thought my rep days were over, but it was good to get involved and help out the others and just really pleased we got the win in the end.

“It’s been a big week training-wise, trying to adjust to conditioning again, in the hits and especially lineouts. During the game I was kind of expecting a hard and physical battle.

“It wasn’t as hard as I thought it would be in the end. I thought we dominated a lot in the game and that probably helped.

“They kind of lived on mistakes and we kept them in the game and that was the frustrating thing.

“We looked good with ball in hand, but kept throwing it away with 50-50’s, and we probably just needed to build a few more phases and keep a bit of patience out there.

“We should’ve made it a better scoreline really.”