She said to set up a voting habit, it was vital 18-year-olds got on the electoral roll and voted in the first election they could.

But only 61 per cent of that age group had enrolled.

The turnout across all age groups was 79.8 per cent.

It is not compulsory to vote in New Zealand.

“Starting out to vote as a young adult sets up a lifetime pattern, when it is not started it tends to wallow,” Whaitiri said.

On the East Coast of the Maori electorate, voter turnout is much higher than in Wairarapa.

Whaitiri said for some reason they “live and breathe politics” at all levels of democracy on the coast.

But she is reaching out to young people via social media, aiming to get the Maori voter turnout up, particularly in Masterton.

Whaitiri is the chairwoman of the Justice Select Committee which has managed the legislation that allows prisoners serving a three-year term and under the ability to vote.

“It’s a human right. Getting back into society, it also about voting for government for when you are released. It is a rehabilitation too actually.”

She also wanted to see civics and democracy being taught in schools.

She said many of the schools she had visited over the past term had teenage students that “don’t know what government does or what voting is for”.

“My grandmother took me to vote as soon as she could and I took my son to vote in his school uniform,” Whaitiri said. 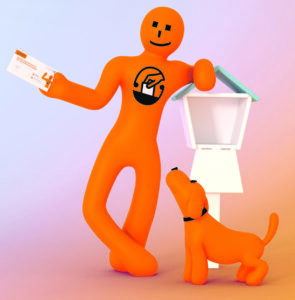 The orange election man has a new dog. IMAGE/SUPPLIED

Enrolment update packs are being sent to 3.27 million enrolled voters this week.

The pack includes information on the two referendums to be held alongside the election.

People can vote on whether the End of Life Choice Act 2019 should come into force, giving people with a terminal illness the option of requesting assisted dying.

They can also vote on whether the recreational use of cannabis should become legal.

This year, would-be voters can enrol online at: www.vote.govt.nz with their driver’s licence or passport.

Last election, it was only possible with a RealMe verification identity.

Changes in the Electorate Amendment Act mean voters can enrol and vote on the same day.

The Electoral Commission’s enrolment update campaign is under way with advertising featuring Orange Guy and his new dog Pup.

Early voting opens on September 3, in just over eight weeks.

Philip Parkes is the returning officer for the Wairarapa electorate.