Hawkes says the path to deaconship was a slow burn. PHOTO/MARY ARGUE

The road dips and winds through Rangitumau, so narrow in places it’s a single lane, and then, when you think you’re almost at the end, a sandy-coloured zig-zagging driveway signals you’ve arrived.

It’s a serene spot, completely off-grid, and beyond the gate is Wairarapa’s newest Anglican vocational deacon.

“We lived for six months in that tiny home,” Hawkes says, waving her hand at one of two small dwellings on the property.

Too long, apparently, especially over winter.

They have moved into a cosy prefab house set back in the hill.

A dozen solar panels flash in the sun below the veranda, which overlooks the Tararua Range.

Hawkes starts on the coffee and recounts her ordination as a vocational deacon in the Anglican Church.

She was not looking forward to the ceremony, which took place on Ascension Sunday at St Paul’s Cathedral in Wellington.

But she was pleasantly surprised.

“I was very anxious about it. But I had a blast.

“It was similar to a traditional church service – almost like a baptism.”

A vocational deacon is an interesting role within the Anglican Church, described as “a special kind of order” for its community focus.

“It’s all community-facing and about getting out and about. You’re talking to people and energising them in their spiritual life,” a church spokesperson says.

Originally from England, Hawkes, a social worker, moved to New Zealand 24 years ago.

She says her husband Richard – an atheist – and her two grown-up children have been incredibly supportive of her increasing involvement in the church. 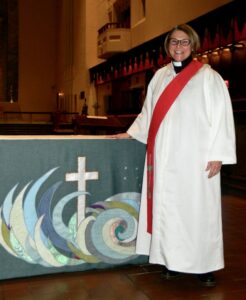 “But I’m not saintly.

“I’ve never had a Damascus Road experience. It was more of a slow burn.”

Hawkes traces the initial steps to visiting her mother in a Wairarapa dementia unit.

“That was what motivated me. She had her faith until the last.

“She could still recite the Lord’s Prayer. It was the last thing to escape her.”

Even after her mother died, Hawkes continued to visit residents in Wairarapa dementia units.

And for the past three years, even during covid, she has visited Lyndale Manor, becoming “a part of the fabric”.

“My job is to be with people. Sometimes I take communion, or we do colouring-in, listen to music.”

She said much of her time is spent sitting with people, encouraging them to have “another bite” at meal times.

“Sunday is a typical church day, so I go in then. I also know, from visiting as a daughter, that Sunday can feel a bit flat.”

Hawkes maintains delivering sermons and reading scripture is far from the agenda.

“Oh, no. It’s not like that. I ask the nurses if there is anyone they would like me to see.

“And sometimes people mention God, just randomly, but mostly I run on at the mouth and try to be kind.”

Raised in the Anglican faith, Hawkes says she was never particularly religious, but at 18, unsure of what to do, she embarked on a theology degree at La Sainte Union purely because it interested her.

Since then, she has added a social work degree and a masters in chaplaincy to her academic record.

“My thesis was interviewing chaplains in dementia units. But I would like to do more…”

She’s now eyeing up a doctorate in the hope of extending the scope of interviews to people from all faith denominations offering support in dementia units.

But perhaps that will happen when she is no longer working full-time.

For now, Hawkes says a vocational deacon is exactly what she wants to be.

“Deacon is my thing. I’m not going to be anything else. This is it.

“People need to be in care, but that can mean we forget about them.

“God is already in the dementia unit. I just go so that these people know they aren’t forgotten.”

As we wander back down the drive, Hawkes sees me off at the donkey pen.

I spy a shovel and pile of manure. I can guess the afternoon task ahead.

Hawkes sets up a speaker on the fence post.

True Crime podcasts, she says – she’s obsessed with them.