Screengrabs of the ‘action’ above and final score below, in the Wai-Bush-Auckland virtual 1985 NPC semifinals ‘played’ on Facebook on Sunday.

‘Revenge’ at last for Wairarapa-Bush

Wairarapa-Bush came from behind and survived a late yellow card to upset Auckland 34-30 in a stunning 1985 NPC virtual semifinal on Sunday. The game ‘played’ on Eden Park, was the brainchild of Wai-Bush chief executive Tony Hargood to get closure on what he called the biggest travesty in the union’s history.

Wai-Bush had their best ever finish of fourth in the 1985 NPC, but with no playoffs in place, there was no chance for the green and reds to avenge a controversial 16-6 loss to Auckland at Memorial Park earlier in the season.

Auckland went into the game as the hottest of favourites having finished top of the points standings and having claimed the Ranfurly Shield with a 28-23 defeat of Canterbury in the ‘Game of the Century’ at Lancaster Park.

Coach John Hart named the same team who won the round-robin clash at Memorial Park for Sunday’s match. That had All Blacks’ points-scoring machine Grant Fox start on the bench with wing Terry Wright given the kicking duties.

It was Auckland who started the better going out to an early 12-0 lead with tries to flanker Mark Brooke-Cowden and second-five Kurt Sherlock. 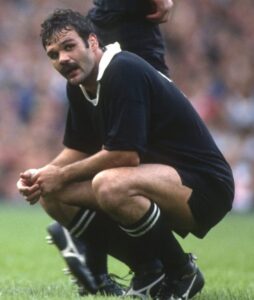 All Blacks – lock Gary Whetton and prop John Drake – soon felt the wrath of referee Bob Francis, both sent to the sinbin for high tackles.

That opened the door for the green and reds and with some attacking rugby, they narrowed the gap to 17-21 at halftime, after trailing 5-18 at one stage.

Wai-Bush continued with their attacking intent in the second stanza and were rewarded with three more tries.

Impressive No 8 Carlos Baker showed his class with a hat-trick of tries, while first-five Phil Rutene sprinted 50m to dot down. Marty Berry and Mike Foster also crossed for five-pointers.

Rutene later turned from hero to zero when he was yellow-carded for a high tackle late in the game.

Wright narrowed the gap to four points with his sixth penalty but in the end Wai-Bush did enough to hold on to record a famous “virtual” victory.

The margin flattered Auckland somewhat with Wai-Bush fullback Mark Benton having a poor day with the boot, kicking only two conversions from six attempts. The win will have Wai-Bush travel to Lancaster Park, Christchurch, next weekend for the virtual championship decider against 1985 NPC runners-up Canterbury.