The vehicle came to a stop half in one neighbour’s shed and on another’s garden. PHOTOS/SUPPLIED

A ringing cell phone, vaping and speed led to a car ploughing into the back fence of two properties in Greytown.

Less than 60 seconds before the crash, police received a call from a passer-by saying they were concerned the car was being driven erratically.

The female driver was driving north into Greytown at 8.13pm on Tuesday evening when she reportedly got distracted trying to plug in her vape when her cell phone rang.

The vehicle crossed the road, missing the bend at the entrance of Greytown, and crashed into the fence along Main St, coming to a stop half in one neighbour’s shed and on another’s garden.

The Times-Age talked to the two occupiers of the properties crashed into and both said it was lucky nobody was seriously hurt. 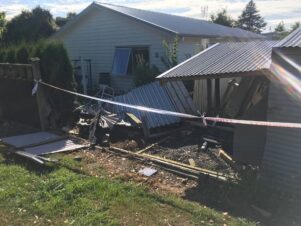 The back fence of two properties a car crashed into along Main St in Greytown.

“It was an amazing noise”, one of the property owners, a woman, said.

She said she would usually have been in her garden which was where the car drove straight into, scattering corrugated iron over the back area.

She said a piece of wood could be seen stabbing through the front window on the passenger’s side, so it was lucky no one was in the seat.

A crane had to be used to lift the car out of the two sections. The front of the car had already been covered in duct tape for an unknown reason.

The male neighbour’s shed was destroyed by the impact and his ladder and trailer damaged.

He said it was annoying hearing about what could have been the cause of the crash and also that the driver was a learner, not insured and still paying off their car.

Both neighbours said they were frustrated the woman was not insured and they now faced uncertainty around receiving money to pay their excess.

“She didn’t even say sorry,” the woman said.