Just playing good hockey was the focus for Dalefield player-assistant coach Katherine van Woerkom as the team prepare for today’s clash with Toa at Clareville.

“It was the first time I can remember that we’ve gone into double digits for Dalefield, which is pretty nice to be getting the goals in and not just winning games by a couple,” she said.

“We’re playing good hockey to get those goals, and that’s important to me. I don’t want to be winning games and playing bad hockey.” 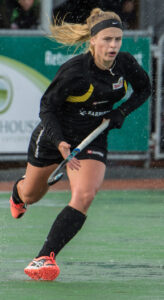 Van Woerkom has bad memories of last year‘s first-round match against Toa, who are noted for their physical approach.

She suffered a horrendous gash when hit by a stick across the knee and was forced to miss several rounds while the wound healed.

Toa started the season with a draw with Victoria and a 0-5 loss to Harbour City, and van Woerkom expected them to bring a defensive game.

“Going on previous years, they’re quite a defensive team, they just pack the 25, and they play lots of long balls and crash balls,” she said.

“We don’t know what they’re going to throw at us – they may have changed and have new players.

“But again, we’re just focusing on playing the game and the hockey we want to. Against those weaker teams, we want to focus on refining our game instead of just trying to get goals in.

“I never really think about goal difference or bonus points.”

Van Woerkom was thrilled with the way the team have started and predicted an exciting season ahead.

“Personally, playing with some of the ‘old girls’ [Felicity Reidy, Jenna Anderson, Morgan Percy] again is pretty cool. I think we’ve got a really good mixture of experience and a bit of youth.

“Reese Robertson playing centre half is pretty sweet controlling the game, Kianna Dawson at the back is playing really good hockey for her age, and Amy Bunny at the back with her is very good.

“Hopefully, they can learn a bit from Katie Saywell, who’s now back from overseas. It’s pretty exciting to watch them develop”

Percy and Rosie Rooderkirk are away for today’s clash, while doubt surrounds captain Michael O’Connor, who was sick at training earlier in the week.

Anderson returns after missing last week due to work commitments.

The match starts at 12.30pm today at the Clareville ground.