Value ‘The politics of enough’ Each week, the Wairarapa Midweek will profile one of Wairarapa’s political candidates. This week, LISA URBANI talks with Celia Wade-Brown.

She gave a talk about her life at 3Mile coworking space in Carterton, as part of the Wairarapa Women in Business third Friday meet-up, and her authenticity is her strength.

She is frank, funny and forthright, in a very uncomplicated, relatable way.

As she put it, “nothing I say is confidential”.

For all present it was interesting to learn of her humble beginnings in a council flat in London in the 1950s, an only child – [she later discovered some half-siblings] – born in St Mary’s Hospital in Paddington, the very same hospital in which royals have their offspring, although she pointed out with a laugh that she was not born in the posh private wing.

Her father was an engineer and strongly encouraged her interest in science, making sure she had a chemistry set, and even a train set as their flat looked on to the train line, and the smoggy, sooty steam trains were a source of fascination for her growing up.

The family only acquired a car and a television set when she was seven, so it was a simple, frugal upbringing, with hand-made clothes and cultivating and propagating seeds with her grandmother.

Reading and learning was a pleasurable pastime for her, and walks in Hyde Park and Kensington Gardens awakened her love of nature.

It was a happy and loving childhood with diverse friendships.

As she said, “I am excited by difference rather than frightened by it, it helps me connect with a lot more people”.

This has always been her philosophy, openness to new ideas, even in political life.

“It would be awful if everyone elected had the same view.”

But Celia had her rebellious side as well, as evidenced by her schooldays when she wanted to enter a nude painting of Salome in an art competition, but her artistic endeavour was deemed most unsuitable by censorship that amazed her. 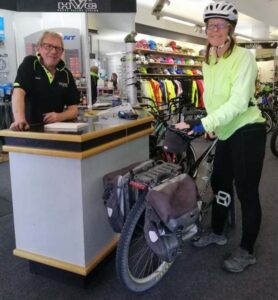 Celia Wade-Brown on her cycle tour of New Zealand. PHOTO/FILE

Uniforms were not her friend either and she drew parallels with the criticism she occasionally received as Mayor of Wellington for her outfit choices, though when she famously cycled to meet Hillary Clinton she wore a smart dress suit.

After completing her A Levels in Science at school, through connections of her godmother she ended up in Ghana as a lab sssistant at a girl’s’ school, after inheriting £100 to help her travel – a princely sum in the 1970s.

Meeting and socialising with Ghanaians and ex-pats, Americans, Canadians, French and Lebanese, a real mix of cultures, was an eye-opener, as well as realising how limited the laboratory conditions were, compared with her own school.

It was an adventurous time, night-clubbing in Cote d’Ivoire, visiting Mali, and later realising that she had inadvertently stayed in a brothel.

Soon, she found herself back in the UK, studying at Nottingham University, majoring in politics and English.

Equipped with a good sense of logic, thanks to her philosophy studies, her first job was at IBM, even though she had never touched a computer.

It was well paid work and good experience of a multi-national corporation.

After IBM, she found herself in a small consulting firm, working on actuarial tables for insurance companies.

Later training as a teacher, she married and emigrated to New Zealand in 1983.

Celia’s contribution as a city councillor and eventually mayor of Wellington is well documented.

There were many lessons to be learned along the way in politics – being comfortable in herself, not taking criticism too personally, even considering if there was a point to be learnt, having a sense of humour, and people who kept her grounded, being careful of false friends.

She particularly enjoys the cultural events she attends, such as the Matariki ceremony which was enacted for the first time in 200 years at Lake Wairarapa.

Citizenship ceremonies were also special to her as “joyful occasions for new Kiwis.”

There are exciting international functions, Rugby World cups and royal visits, with a supportive husband and family who are happy to let her be in the limelight, but also to accompany her when needed. She said you have to be realistic, and her “strategy was always to go for what was achievable and also have some big audacious goals”.

Personal resilience was very much needed in her roles, and at 64, her passion for life, for nature, for service to others, and her energy to explore our beautiful country – having walked and cycled the length and breadth of New Zealand – puts many of us to shame.

Grounded by values established as a child, and mindful of the lessons she learned along the way, her home at Duntulm Carbon Farm, in the Mangatarere Valley is her sanctuary.

The 250 hectares is a haven for propagating and planting native trees under a Permanent Forest Sink Initiative covenant on regrowth, for predator control and honeybees, for carbon credits, and relaxing with family away from the demands of political life.

As Green Party candidate for Wairarapa, she says the diversity of the party – with Chloe Swarbrick being the youngest MP, and Dr Elizabeth Kerekere who is both part of the Rainbow community and Maori – makes her feel “supported to be yourself”.