Vaccination rally gets a super result Over a thousand covid-19 vaccine doses were administered in Wairarapa for Super Saturday. PHOTO/GRACE PRIOR

More than a thousand covid-19 vaccine doses were administered in Wairarapa on Saturday as New Zealand rallied together for Super Saturday.

Wairarapa residents rolled up their sleeves as 1278 doses were administered across our region, Ministry of Health figures showed.

“Both Carterton and Masterton were well supported. It was good to see people coming to support the effort.” 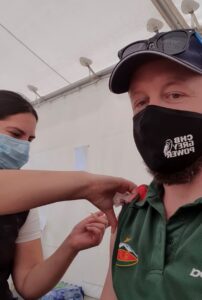 Lang arrived early at the Carrington Park event and said there were already quite a few people getting vaccinated.

There had also been an event in Gladstone on Friday aimed at the rural community where 88 vaccinations were administered.

“If you’re still unvaccinated, please do it for everyone’s sake; for yourself, your community, and the economy to get back to normal.”

Wairarapa MP Kieran McAnulty said he called into several centres across the electorate, including Masterton and Carterton.

“I was so impressed with the community spirit that was on display. Everyone involved – the health workers, security, volunteers, and local vendors who donated goods – did such an amazing job.

“A big thank you has to go out to all of them. The call was put out and once again the Wairarapa community stepped up to the crease.”

Director-General of Health Ashley Bloomfield said he wanted to give a huge thanks to every eligible New Zealander who had stepped up over the past few days to get their shot.