Originally from Switzerland, New Zealand Valais Blacknose sheep are raised from embryos imported from the UK and implanted in ewes here. PHOTOS/SUPPLIED

From Switzerland to the UK, to New Zealand and now the US, Valais Blacknose sheep are making waves across the world. 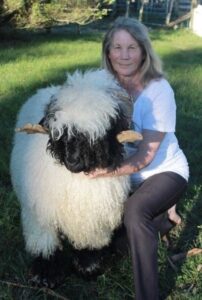 South Wairarapa breeder Christine Reed first found out about the breed in 2017.

Her financial adviser and friend Lindsay Strathdee, whom she had known for many years, approached her for advice about how to bring in a new breed of sheep.

“I work in biosecurity and was looking for something new to do,” she said.

For many years, Reed bred miniature cattle and was known to experiment with other sheep breeds such as Dorper.

“I realised I could keep a lot more sheep than I could cattle.”

She fell in love with the Valais sheep’s distinctive look – shaggy coarse wool, with a black face and black feet and curly horns.

The Valais sheep breed originate from the mountain areas of Switzerland.

Reed formed a breeding partnership with Lindsay and Sally Strathdee of Motueka, and among the three of them now have about 40 ewes.

She said it was remarkable to think about the journey the embryos made – from being extracted in the UK, frozen, and transported to New Zealand, implanted into surrogate ewes and then making their way on to the farm.

New Zealand-born Valais Blacknose all hail originally from UK lines, having been imported as embryos and implanted into other sheep breeds already in the country.

Reed said bringing the embryos into New Zealand wasn’t difficult as it came of the back of reforms.

“Things were changing as we were importing.”

But importing embryos is a costly exercise – ranging from $10,000 to $20,000 for each ewe successfully raised.

About 70 per cent of embryos survived to lambhood.

“We only focus on the best genetics in the UK.” 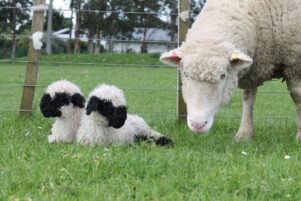 Only about 70 per cent of the embryos survive to lambhood.

The embryos were initially implanted into Poll Dorset Sheep, as the Valais Blacknose is a fast-growing lamb which grows into quite a large sheep.

The trio also experimented with East Friesian Coopworths and Highlander breeds – a mix of half finn, quarter texel and quarter romney breeds.

“The Highlander have been fantastic [as surrogate ewes],” Reed said.

“We are not selling purebred Valais ewes while we are still building up our flock.

“We need to bring in new genetics every year [to prevent in-breeding].”

The breed made headlines around the world after being photographed at the Agricultural Show in Christchurch.

Now, Reed and the Strathdees are preparing to send the first batch of New Zealand embryos to the US to establish their own lines.

“You can’t import embryos direct from UK to US,” Reed said.

“New Zealand had an advantage because of our animal health status.”

The process has involved a long negotiation period of almost three years between the Ministry of Primary Industries and the United States Department of Agriculture to agree export conditions that would work for both countries, while managing potential biosecurity risks.

Lindsay said it was an exciting development for the Valais Blacknose NZ partnership and breed.

“We believe the opening up of this new market provides exciting opportunities for the wider New Zealand sheep industry, especially given our current competitive advantage in managing the impacts of covid-19 on our ability to produce and trade agricultural products.”

The first purebred Valais Blacknose lambs from New Zealand embryos will be available for sale in the US from March next year. The first purebred Valais Blacknose lambs from New Zealand embryos will be available for sale in the US from March next year.

Meanwhile in New Zealand, Reed and the Strathdees are continuing to develop the flock and market the breed as a lifestyle animal.

While the breed was originally developed to be for dual use – for meat and producing coarse carpet grade wool, Reed sees them as part of the family.

“Pretty early on, I wondered what I could do with the wool as well as pets. We are really breeding them as a lifestyle type sheep.”

She said they had great personalities and were well-suited as children’s pets or companion animals.

“They have amazing personalities.”

The wool was also well suited for many crafting needs – especially felting.

“It’s a unique wool that you can use for many purposes.

“Because their wool grows really quickly you have to shear them twice a year.”

Reed had also cross-bred a few with English Leicester breeds to make them more affordable for lifestyle owners as part of a breeding programme.

Many of her lambs went to lifestyle blocks around Wairarapa, but the breed was most popular in Auckland.

She said it was important for people to do their homework before purchasing a lamb and to know what a good animal looked like.

“The main thing I want people to know is to be careful if buying pure bred animals as there is a big difference in quality of imports.”

The Valais Blacknose sheep are used to cool and dry conditions but can tolerate the heat well as long as they are shorn and, like all sheep, have access to shade.

So here in New Zealand, in a wetter climate, care needs to be given to the sheep’s feet but their approachable natures make foot care easy out in the paddock.

In New Zealand, they love the roughage of hay while in Switzerland, they enjoy herbs and plants found in the mountains, along with grass and clover.