Amid the deluge of event cancellations this summer, Tauherenikau remained a shining jewel in the event calendar crown. It somehow managed to host big festivals where many had folded.

However, New Zealand’s move to the red traffic light system on Sunday night has well and truly put the boot into upcoming celebrations, including this weekend’s 2022 Wairarapa Country Music Festival.

Tauherenikau event organiser Matthew Sherry said they were “pretty gutted” with the weekend announcement, but not all hope was lost.

“We are currently undertaking a review as to where we are. For Martinborough Fair [March 6 and April 3] and 121 Festival [March 11-13], it’s a wait-and-see scenario to see how omicron spreads.

“It’s five and six weeks away, and it’s the very early stages. So, at this stage, no one really knows.”

He said the most challenging part was losing the country music festival, primed to be bigger and better than ever, a week out.

“Sales were through the roof. It was going to be huge. It’s gutting.”

“To be so close, one week away with such a great line-up. The atmosphere, weather, everything was looking good.”

Sherry said the event had been postponed to January 6-8 next year, and it was fortunate that all the artists were onboard.

“People will be offered a refund or to retain their tickets. A lot of them are retaining their tickets which is good.”

Sherry said he was on a bus to Wellington when it was announced the Prime Minister would “go live”.

“I had a gut feeling. You just knew. I had been ticking off each day.”

He said he spent the afternoon fielding calls and emails, many from people already travelling to the music event.

Sherry said over 130 motorhomes and caravans had been booked and that they had been expecting that number to double by the weekend.

“It was all pretty exciting.” 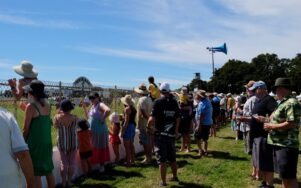 Options to hold Tauherenikau’s Waitangi Race Day Meet are under review after New Zealand moved to the red traffic light on Sunday. PHOTO/FILE

He said no decision had been made regarding the Waitangi Race Day Meet on February 7 and said options were under review.

“Under the red light, we can operate in pods of 100 people, so we are exploring that at the moment.

“It’s likely that it will be very limited numbers. We want to be absolutely sure we can manage that safely and securely.”

Sherry said Tauherenikau would still operate under vaccine passport requirements and could cater up to 100 people.

He said he remained hopeful that restriction would ease and allow events in March to take place.

“You have got to always look on the bright side. But at the end of the day, we’ll just get on with it.”