UCOL Wairarapa director Carrie McKenzie at the entrance to the campus. Signage would soon change to a Te Pukenga-UCOL co-brand. PHOTO/TOM TAYLOR

New students enrolling at UCOL Wairarapa may find themselves graduating with certificates from another tertiary education provider.

Students would see changes on campus in the coming months as UCOL morphed into a unified national vocational skills and training institute, Te Pukenga.

In one of the first noticeable changes, the polytechnic would gradually replace its branding, with the Te Pukenga brand emerging alongside the UCOL brand.

Te Pukenga, meaning “to be proficient or skilled in particular roles”, would incorporate 16 tertiary education providers across New Zealand, including the four UCOL campuses.

“From next year, all akonga [students] at our community campuses in Whanganui, Wairarapa, Horowhenua, Manawatu, and our online and in-work students, will be enrolled with Te Pukenga,” she said.

“Our team will be here, as we are now, to help learners and employers gain the skills and employees they need.” UCOL is morphing into a unified
Te Pukenga. PHOTO/MARY ARGUE

From April 2023, the UCOL Wairarapa branding would disappear and be replaced by Te Pukenga.

Until then, the institute would be co-branded with the new and the old.

She said the final name of the campus had not yet been determined but could be “Te Pukenga Wairarapa”.

Te Pukenga learners who completed their studies in 2022 would receive their certificates under the subsidiary’s name, such as UCOL Wairarapa.

Learners who completed their studies at the start of 2023 would receive a co-branded certificate.

Those who completed their studies from partway through 2023 would receive Te Pukenga-branded certificates.

“For the learner, it will mean parity across the country,” McKenzie said.

“You’ll have one qualification, rather than at the moment where nursing has something like six qualifications across the country.

“If I’m studying here in Wairarapa and then my partner gets a job in Invercargill, I can join Invercargill Te Pukenga and be doing the same course.”

McKenzie said having all subsidiaries working together would make for a less competitive market where students were put first. 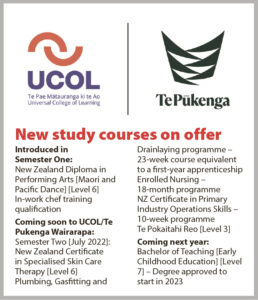 Although the New Zealand Qualifications Authority [NZQA] had to approve all programmes, McKenzie said there was scope for many variations between institutes in how the programmes were taught.

For subjects such as nursing, Te Pukenga was working to combine separate qualifications into a unified programme.

McKenzie said this approach would improve course content across all subsidiaries.

“It’s very much based around the regional campuses meeting the needs of the region.

“Having really good relationships with industry and employment within your community is going to be the number one determinant for whether a programme will be run.”

At UCOL Wairarapa, McKenzie said this process had already started.

McKenzie sat on the Regional Skills Leadership Group and had heard the need for truck and heavy vehicle drivers in the region.

From Semester Two [July 2022], the institute would offer Commercial Road Transport skills. The course would take students with learner licences through everything they needed to know for a career in the industry, including compliance, vehicle systems, technologies, loading principles, forklift endorsements, and driving techniques and strategies.

Meanwhile, a heavy vehicle operator programme would take students on their Class 1 to Class 4 licence or those on their Class 2 to Class 5, all within a six-month period.

In response to the needs of Wairarapa’s skills shortages in the health sector, UCOL Wairarapa had also introduced an Enrolled Nursing course. The programme lasted 18 months rather than the three-year Registered Nursing Programme and prepared students for nursing care in community, residential, and hospital settings.