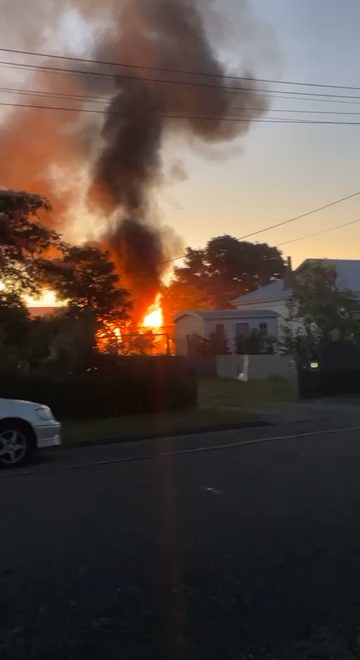 A shed in Martinborough caught fire on Monday night. PHOTO/SUPPLIED

Two shed fires on the same road in central Masterton in the past two weeks are thought to have been deliberately lit, while another shed fire in Martinborough is also under investigation.

Masterton fire officers warned the public about security after a suspicious fire on Worksop Rd on Monday morning.

Masterton’s fire brigade was called to the shed fire on private property at about 9.30am on Tuesday.

It was the second suspicious fire on the road within two weeks.

Masterton fire officer Murray Pike said Monday’s fire was reported by the property owners and was under control within half an hour.

He said there were no injuries, and the matter was “now in the hands of police”.

Pike said it was a reminder to businesses and the public to check security for all buildings and rear sheds, ensuring “no one has access”.

Police confirmed they were making inquiries into how the fire started.

A shed fire also occurred in Martinborough on Monday night – about 12 hours before the Masterton fire.

He said the shed, about the size of a single car garage, was “well alight” when officers arrived.

Hawkins said the team did well to protect neighbouring properties and fences near the blaze.

He said the fire was under control by 9.50pm, but the shed was a “total write-off”.

He said the fire was not being treated as suspicious. However, the cause was still undetermined, and a fire investigator was on site on Tuesday.

Hawkins said the station had received multiple calls on Monday evening about the blaze, initially reported as a backyard fire.