Police at the scene of the double fatal shooting. PHOTOS/EMMA BROWN

Wairarapa’s first homicide investigation since 2013 has been opened after two people died in a firearms incident near Whakataki, north of Castlepoint, on Monday morning.

Police were called to the rural address on Masterton-Castlepoint Rd, shortly after 5am where they found the bodies of a man in his 50s and a woman in her 40s inside the house.

Wairarapa police area commander Scott Miller said there was no danger to the public and police were not seeking further suspects.

It is understood the two dead people were in a relationship and lived at the property after moving in about a year ago.

He said three other people were on the property when police responded to “reports of one or more shots fired”.

The witnesses, in their mid-20s, were taken to the Masterton Police Station and had been offered counselling from Victim Support. 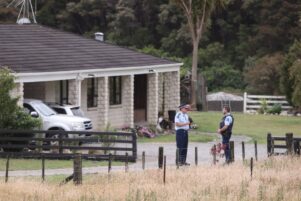 Wairarapa Police outside the rural property.

“It’s a family house with two generations in the house,” he said.

Miller could not confirm whether police were treating the incident as a murder and suspected suicide, saying only that a homicide investigation had been opened.

“Our initial assessment is we are not looking for anyone else in these deaths,” he said. “We don’t believe there’s any danger to those in the area.”

He said the police had no indication of domestic violence at the address on their records and the couple was not known to police.

“We haven’t been called to this address before,” he said.

“I would say the community were not expecting anything like this to happen.”

A neighbour who had lived in the area for 40 years said they didn’t know the family very well.

They said they heard the police helicopter flying around on Monday morning but were first alerted to what was going on after reading news online.

The Armed Offenders Squad was initially called to respond but was stood down after armed Wairarapa police assessed and cleared the scene.

Police found a gun inside the property believed to have been used in the shooting.

A Wellington Free Ambulance spokeswoman said two ambulances were sent to the property at 5.10am after a 111 call from someone in the house.

Forensic teams from Auckland and Wellington arrived on Monday afternoon to examine the scene.

Miller said the names of the dead were known to police, but they had not released them at the time of publication.

Police would remain on site for several days while they investigated “exactly what occurred [Monday] morning”, he said.