Capital Football are calling for an overhaul of the governance and management of Memorial Park.

That comes after what CF chief executive Richard Reid described as deliberate stalling tactics and obstruction in getting answers over the management of the artificial turf.

The Wairarapa Multi Sport Stadium Trust was established in a Deed of Trust on November 2014, “to establish, own and administer an all-weather multi-sport and community activities field for the benefit of the general public”.

The Wairarapa-Bush Rugby Union website, at the time, stated that, “The stadium assets will be held in trust and managed independently”.

The facility is managed by WBRU staff, who provide part-time scheduling and ground maintenance roles.

Tensions between CF and the WBRU rose in August, when Wairarapa United women were forced to play their final W-League game at Hullena Park to make way for a Wairarapa-Bush Heartland Championship warm-up match at Memorial Park.

Reid said Wairarapa United asked CF to deal with the WMSST in August 2018.

“From the start, it was clear that there were certain inequities over the use of Memorial Park,” Reid said. 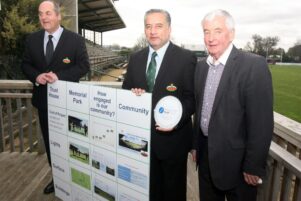 “In very simple terms, rugby and football were paying $15,000 each but football’s use was limited to one club [Wairarapa United] and rugby’s use involved multiple entities.

“Rugby gets not only favoured access but more use.”

Reid said he started asking hard questions of the WMSST through the operational arm, the WBRU.

“We were unhappy with some of the answers we were getting and then being ignored.

“All we ever wanted is for football to get a fair crack and that is what we still want. The more we dug and dug, the more obstruction we encountered.”

A governance review was undertaken by independent reviewers at the instigation of the trustees earlier this year.

The Times-Age understands a diluted version of the original report has been circulated to stakeholders, but Reid said he had yet to get a copy.

“I haven’t asked to see the document, and I haven’t had any communication from the WMSST over it.”

The Deed of Trust requires an annual general meeting be held within four months of the end of each financial year [December 31].

Reid had repeatedly asked to be informed of the date of the 2019 AGM so CF could attend, however, the meeting was held in-house, when he believed it should’ve been notified publicly.

CF dealt with 13 other turfs in the Wellington region and all charged an hourly rate. They were all multi-use except Petone Memorial Park.

Masterton Memorial Park was the only one that charged a fixed fee and was by far, the worst administered.

He said CF had been very patient in dealing with the WMSST, but it was time to take action now.

But Playle said an agreed schedule of times for games and trainings had been in place since 2015 and that Masterton District Council had been represented on the trust since 2014.

No decision had been made on the appointment of an independent set of trustees and independent chairman, he said.

“On what grounds do Capital Football believe that they should get a copy [of the review]?” he asked.

One of the driving forces in developing Memorial Park, Phil Keinzley, said the trust had gone away from its original intent which was to be an “all-year sports’ facility for everybody”.

“It was all going to be part of a sports hub, which would also include tennis and bowls, but certain individuals really blocked bowls,” the former Wairarapa United Football Club president and coach said.

“There was also the possibility of rugby league using the park, and that was all-important in getting New Zealand Lottery funding.

“At the time we had the Heartland team in the National Youth League and Wairarapa United were chasing a place in the National League, there was a push for the colleges and other codes to use it.”

Keinzley said Wairarapa United contributed $50,000 towards the development, and the WBRU’s contribution came from a levy taken from all their clubs.

He said the Wairarapa-Bush and Wairarapa United teams were to be treated equally and given precedence.

Keinzley said over the years there had been “attempts to get rid of football” and that some trustees wanted Memorial Park just to be a “rugby complex”.