The DNA of the tuatara, a reptile endemic to New Zealand, has been successfully mapped. 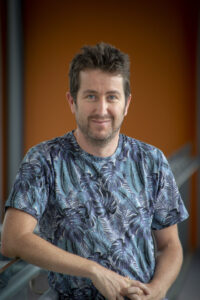 Former Wairarapa College student David Winter, 39, who grew up in Masterton, was part of a team of scientists that completed the project, which took 10 years.

If you were to go out looking for dinosaurs by Henley Lake, you wouldn’t need to wait long before you saw a duck floating by, or a sparrow wheeling in the air: both technically referred to as dinosaurs, and descendants of the large, scaly beasts that walked the earth many millions of years before us.

“From a scientific perspective, this has been a missing one among vertebrates,” Winter said.

“It looks like a lizard but it’s more different from any lizard out there. It’s completely its own distinct lineage, and it was the one branch that never had a good genome sequence.”

The lead author of the research was Neil Gemmell of Otago University, with 60 co-authors from around the globe contributing to the project over the past decade.

The findings have now been published in Nature, one of the most widely read scientific journals in the world, with a monthly online readership of about three million.

Winter said that keeping the tuatara project largely within New Zealand, and working closely with the Ngatiwai iwi, meant the personal and spiritual ties to the research were more resonant.

“We could focus more on the things that New Zealanders care about, like conservation and the organism itself, rather than just where they fit in the evolutionary scheme.”

Winter said his love of science had been life-long, but crystallised during his time at Waicol, where he would sometimes work through break periods to finish experiments.

“I used to sometimes spend my lunchtime at Waicol in the chemistry lab and finish up the chemistry experiment, or do a little extra bit.

“Chemistry was really the thing that excited me most at high school, and then in seventh form I got exposed to biology and got more exposed to stuff like genomes and DNA and evolution.”

The culmination of the research means that a missing piece of the genetic puzzle has been restored. This would fuel future scientists to work on the evolution of vertebrates, and also help answer the unique evolutionary and conservation questions related to the tuatara.

“In terms of the evolutionary tree of vertebrates on land, it was the one branch that had never had a good genome sequence. It had been a priority for a long time before we started on the project.”