Trust built in working together A new charitable trust aims to give people with disabilities more control over their lives. 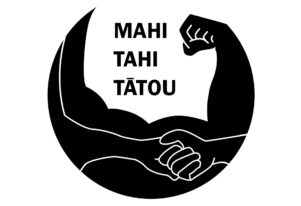 The trust held a competition to design their logo, which depicts strength in working together. PHOTO/SUPPLIED

The Mahi Tahi Tatou Charitable Trust formed in August last year after chairwoman Rebecca Stevens saw a need for more services to support disabled people once they had left school.

“We’re concerned for their future and what happens for them when they finish school because in Wairarapa, there is very little,” Stevens said.

She said covid-19 had exacerbated the need for services, with restrictions making access to programmes more difficult.

“In Masterton, you’ve got Come Sew with Me and King Street Artworks – there’s not a lot of other safe places for people with disabilities.”

King Street Artworks, partly funded by Wairarapa DHB and Creative Communities NZ, aimed to support the mental health and well-being of the community.

However, Stevens said that these kinds of facilities were rare.

“So, we thought we might do something about it,” she said.

Wairarapa Mowing employed two able-bodied people and two people with disabilities to work alongside them.

Eventually, this business would be signed over to the trust, not only providing a source of income for the trust but also employment for disabled people.

Stevens said there were already agencies that helped place disabled people into existing businesses. The trust’s goal was to cater to those who could not fit into a rigid, 40-hour working schedule.

In doing so, the trust aimed to recognise the contributions that disabled people could make within the community.

“Say you have someone that likes animals – why can’t we employ a support worker to work alongside them, even if it’s just plaiting dog toys, or making biscuits for dogs, or starting up a dog-walking club?”

Another venture the trust was looking into was setting up a frozen meal business.

Stevens said many disabled people had support workers who came into their homes to cook for them. However, they often did not work on statutory holidays or other days.

Stevens said the trust was based on the Enabling Good Lives principles used in the disability sector.

“It’s about self-determination, and it’s about what people actually want.

“There’s no point in us providing services that people don’t want or need.”

Elsewhere in Wairarapa, community development project Ka Pai Carterton ran a group where parents of children with disabilities could meet.

Stevens said the group had been helpful to get a sense of what services were available for disabled people in the region.

She said the trust would build on the knowledge of parents and caregivers to meet the needs of disabled people rather than perceived needs. The trust would also start a drop-in centre next month for people to communicate their needs.

“It doesn’t matter what you look like or what you’re capable of – everybody’s got strengths and skills and interests, and everybody has value and something to give.”