Accident victim Ian Brown’s father has organised a trek which started in Gladstone yesterday which his son, Cameron [left], is participating in. Dave Armistead is on the right. PHOTOS/SUPPLIED

And this year his father Joe Brown is running a three-day horse trek which started yesterday from Gladstone to raise money for the service. 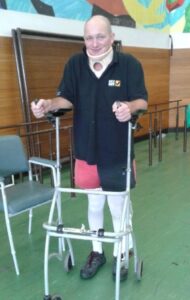 In November 2014, Brown was involved in a tree felling accident at Langdale Station in Wairarapa.

He and some family members, along with two sons were cutting old trees down for firewood when he was struck square on the top of his head from behind by a falling widow maker [broken tree limb].

Luckily it was witnessed by his 16-year-old son Cameron, who called for help.

His wife Kylie recalls that Brown had rolled down a bank unconscious and ended up face down not breathing.

“The Westpac Rescue Helicopter was called in due to the remote location. They arrived, quickly recognised the severity of his injuries and transported him straight to Wellington Hospital.

“Ian had broken 11 vertebrae in his neck and back, received large lacerations to his head, fractured his skull and with large brain and spinal damage his survival was sketchy, and we prepared for the worst,” Kylie said.

Brown was flown by Air Ambulance down to Christchurch Hospital and placed in an induced coma for seven days and had surgery to repair some of the damage.

“After a hard fought few years Ian is back farming, hunting and living life to the fullest with myself and our three children,” Kylie said.

“We will forever be thankful for the treatment he received that day by the Westpac chopper team and then the air ambulance team that kept him alive on the trip down south.

“I very much doubt he would be with us today without the services that Life Flight run and their exceptionally trained and talented team.”

Ironically, Joe Brown has been running the Life Flight Trek for several years on farms around the country.

“If it wasn’t for the Life Flight team, our son would probably not be here – it was touch and go but thanks to Life Flight we were able to get him the help he needed both in Wellington and Christchurch.

“We thought he was going to end up in a wheelchair if he pulled through, but he walked out of Burwood and now is leading a normal life managing a farm for Landcorp [in Wairoa].”

As of Thursday, 75 people had signed up for the trek which began at 9am and travels through Clifton Grove, Summer Hills, Rocky Hills, and Admiral Station.

Life Flight frequently flies to Wairarapa, with 165 people having needed the service from April 2018 to March 2019.

People can donate to Life Flight at lifeflight.org.nz/support-us/donate