Trees to be planted on road 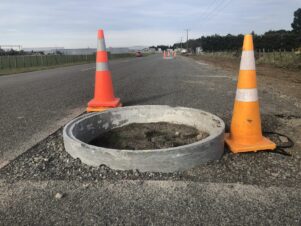 Some residents of Harrison Street East in Featherston were alarmed to see large concrete bollards appear on their road.

Daphne Grant wrote to the council with a, “please explain”.

She was told their installation came after wide consultation. But she is adamant she was not consulted about the narrowing of her road.

They have been installed about a metre out into the tarseal rural road.

“For weeks we have been negotiating concrete rings set into the road and the restrictively narrow lanes for traffic and we assumed it was temporary for services to the sections,” Grant said.

South Wairarapa District Council roading manager Tim Langley wrote to Grant informing her that the bollards were for trees to be planted in. New street lighting, tree planting and pavements were conditions of the resource consent for a new subdivision.

“The detailed designs were approved by council as part of the development engineering process,” a council spokesperson said.

Grant asked if there were plans to “restore the width of the street”.

SWDC confirmed that the road is still the legal six metre width and the bollards were to stay.

Council has approved the staged subdivision of 28 Harrison Street East sections by Brookside Tiny Homes developer, Ian McComb. The tiny home part of the development is yet to be consented. But council said the consent will be notified if that stage is reached.

Ken McKenzie said that the road and bridge were built “specifically to enable heavy traffic to access the industrial area”.

It was funded by the then Ministry of Works, he said, saying heavy transport would now travel through the main road.

Davis Sawmill is at one end, and delivery service Tait and McKenzie at the other end, along with a scrap metal yard.

“The truck had difficulty avoiding that horrible concrete ‘crap’ in the middle of the damn road and wiped out our fence,” she said. “I wonder what will happen next?”

But some comments were from people in favour of supporting the developer and the trees, and said the new footpath and additional trees would make the rural road attractive.