South Wairarapa school children and community members braved atrocious conditions last week to plant 2000 trees as part of a bid to create a permanent native corridor between the Aorangi and Remutaka forests.

“The kids were absolutely incredible how they braved the wind,” Priest said.

“But we don’t do cancellations out here; we just push on.”

He said the students helped with everything from digging to planting, learning the names of the plants as they went: kanuka, ngaio, cabbage tree, broadleaf, hebe, flax. 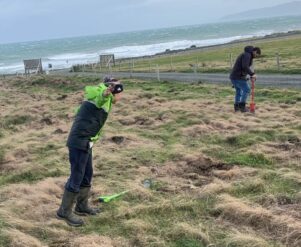 “They learned a bit of grit and determination – they were determined to stay for the two hours despite the bitter wind.”

Priest hoped the “side-corridor” he had created would expand in years to come.

“There’s no other native reserve from the beach at Cape Palliser – this is the first.”

Priest had already planted a section of his campground in native trees. He said Monday’s planting day would double the area.

When enough trees matured, Priest anticipated that tui would return to roost.

“It’s not a big enough habitat yet, but this will help with that.”

The Tonganui Corridors programme aimed to reconnect the public conservation land of the Aorangi and Remutaka forests in the hope that wildlife, including penguins, would thrive once again.

Although little blue penguins were described as “locals” due to their nesting and roosting habits under Palliser Bay baches, they had not been seen in abundance on the coast for a long time.

The Aorangi Restoration Trust, established in 2011, wanted to encourage them to return.

By 2045, the Trust wanted to see the Aorangi Forest and its surrounds restored to their former health, with ecosystems that benefited the rural and urban economies of South Wairarapa and offered places for recreation in the Greater Wellington region.

“The value of reconnecting the small fragmented native habitats across Tonganui is to provide people with a deep connection to this place and ensure our grandchildren and future generations will see and enjoy what once flourished here,” Aorangi Restoration Trust chair Clive Paton said.

Priest agreed with the sentiment.

“It’s good to see the kids coming out to help,” he said.

“They’ll drive out in years to come and say, ‘Hey, we planted that’.”