Travel to another time The exterior view of the historic homestead. PHOTOS/SUPPLIED

A coastal venture has weathered the storms of a covid-hit tourism sector better than most, SHEA TURNER writes.

At the end of Ica Rd, as you drive through a tunnel of trees to Ica Homestead, you could be forgiven for thinking you had arrived at 1866.

The front of the homestead will leave you in awe as you stand face to face with a sprawling lawn lined by immaculately kept gardens and brick steps that carry you up to the historic house.

Showing little signs of wear, it is hard not to get the feeling of being a lot further than 40 minutes from the Masterton town centre.

The Ica homestead and station were originally owned by John Chapman Andrew, a Church of England priest, one time Oxford Don, educationist, pastoralist and Member of Parliament for Wairarapa. Aerial capture of the 1866 time capsule.

The term Ica comes from Chapman’s initials; as a lecturer in ancient Greek, he changed the first letter of his initials to refer to Ioannis, the Greek name for John.

The station has long been split up and the homestead 20-acre block was split off seven years ago when Carmen and Dick Tredwell bought it.

The former farmers started the Whareama Coastal Walk 10 years ago, when they were just around the corner from Ica station at their own little farm.

The idea came from the Tora Coastal Walk, another walk and accommodation operation nearby.

When the homestead came up for sale, the two saw their chance to move to a more convenient location and expand their venture.

Dick Tredwell said it was the perfect opportunity because they wanted to get out of farming.

The Whareama Coastal Walk runs on a seasonal basis from October to April and offers a one-day walk or two-day and two-night walk package. 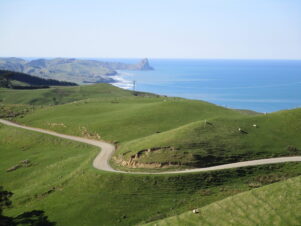 First glimpses of the sea from the Whareama Coastal Walk.

Don’t be alarmed by the length of the walk – the homestead boasts a pool and spa facility to ease any achy legs.

The walk goes over four different farms and has evolved since it first started.

It showcases and gives access to some of the most beautiful Wairarapa coastline views on well-marked farm tracks.

The package is a fully-catered walk, including all breakfast, lunch, and dinners, accommodation, and transportation of gear.

The Tredwells say the walk is a bit of a bucket list adventure for many, and often they come to tick it off along with some of the other walks in Wairarapa.

Carmen says their slogan fits in with what Kiwis are looking for; something “off the beaten track”.

Whareama Coastal Walk can cater for a group as small as two to a group as large as 16.

Carmen says it is largely used for friends or work colleagues to catch up for weekends away.

They serve mostly domestic-based clients, so have not seen the covid-effect other tourism areas have.

“We were actually a bit of a covid success story.”

They experienced one of their busiest seasons during the 2020-21 peak season and had to turn people away because they were fully booked.

During the offseason, the homestead and cottages are still available as a bed and breakfast or rental, but the walks are not accessible during the farming season.