Among the graves in the Masterton cemetery is that of Christopher Carr, a young man who had a sad and troubled life. His life ended tragically 100 years ago, as Gareth Winter from the Wairarapa Archive reports.

Christopher Carr was born at Te Ore Ore in 1888, the son of Honora Rock and her husband Patrick Carr. They had married in Ireland in 1875, shortly before migrating to New Zealand where they were to have a family of seven, before Honora died in 1900. 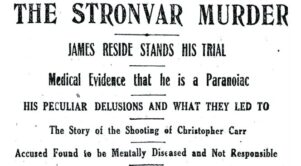 Shortly after her death, some of her children sued their father and the trustees of their mother’s estate, claiming they were being denied access to the funds from the estate due to the neglect of their father, who they also asserted was frequently drunk.

Christopher attended St Patrick’s School in Masterton, and first appeared in the Masterton Court when he was found guilty of riding on the footpath in Queen Street in 1908.

Four years later he was in a lot more trouble, charged with having liquor for supply. He had been found in Queen Street with a bottle of whisky and a glass. He gave evidence that he had been at Alex Reside’s house in Lansdowne, a man he had worked for off-and-on.

He was found not guilty of the charge, after Sergeant Miller could not provide proof that Carr had actually sold the whisky rather than giving it away.

The charge was repeated a year later in April 1913 but was once again dismissed.

He was back in court in 1916, the police accusing him of being a disorderly person. In the end the magistrates took the view that the charge had not been proven – again – and he was once more discharged.

His life seemed to settle down after that, and he worked for Alexander Reside on his Stronvar farm. He lived with the Resides, sharing a room with Reside’s son Jim.

Jim Reside was born in 1879. By 1908 he was a prohibited person and his troubles with alcohol continued – he was found guilty of public drunkenness in 1917.

Surprisingly, he was conscripted into the army, and in July 1918, left for overseas service.

He contracted influenza, and was reportedly disturbed by the sight of so many soldiers being buried at sea.

After recuperating in the United Kingdom, he then came home to live with his father on the farm at Stronvar, sharing a room with Carr.

His return to New Zealand was not without troubles and he returned to his heavy drinking ways.

In early September 1919 Reside father and son and Carr spent the evening in the house.

Jim Reside lay on his bed reading, while Carr played a game of patience. Jim joined Carr and they played a few games of cribbage, before they all retired about 10.

An hour later Alex Reside was woken by the sound of gunfire, and rushed into the room and found Jim standing over Carr.

Jim said he had shot Carr and that there were two more enemies outside he was going to get.

Alex tried to calm his son down, and together they agreed to go across the farm and get Jim’s brother and then ring the police and a doctor.

It was too late for Carr. He had a massive head wound and died soon after.

Jim Reside explained that Carr was in collusion with the masons, and was going to blow them all up with a bomb.

He ran away and when found by police he was in bed with the gun and two cartridges, and a razor which he had used to slash his throat. He was removed to hospital.

A large funeral was held for Christopher Carr, and two months later James Reside was tried for murder.

Witnesses testified as to his mental state, and his father told the jury that Jim’s mother had suffered from mental delusions, including being persecuted by Masons.

It did not take the jury long to find Jim Reside not guilty by reason of insanity. He was transferred from the prison to Porirua Mental Hospital where he died in 1960.