One of the commonly used Fletcher 400s takes off from the Hood Aerodrome in Masterton. PHOTO/FILE

It was once one of New Zealand’s most dangerous jobs — some might say it still is — but aerial topdressing has revolutionised hill-country farming and come a long way since it first started.

The practice began in the years following World War II.

This feat of New Zealand ingenuity allowed farmers to increase the productivity and fertility of land previously inaccessible by plough or other means.

It has its roots in Wairarapa — some of the first topdressing trials were carried out on farms across the regions in 1948.

Thirteen properties with different terrain, soil, pasture and management were selected for the trials while the Royal New Zealand Airforce supplied the aircraft.

John Arends flew as a topdresser pilot for around 15 years before becoming chair of the Rural Aerial Co-op in Pahiatua in 2002. 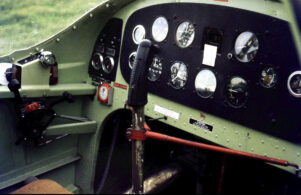 Then: The panel of the Co-op’s first aircraft a Fletcher 400 complete with 1970s technology. PHOTO/SUPPLIED

The co-op was started in the 1970s as a way for farmers to gain more control in what was once a closed industry — it’s owned by about 200 farmers across the lower north island.

Their two aircraft service farms from Riversdale to Waipukarau, and Taihape to Waikanae.

Arends always had an interest in flying.

“As a farm boy in Eketahuna, I always liked seeing the topdressers flying around. And in the 1970s and 1980s every second guy wanted to be a topdressing pilot.”

From Tiger Moths, to Fletcher 400s and now Cresco aircraft, he said the technology has come a long way since he first started at the industry’s peak in the 1980s.

“The change has mainly been in the type of aircraft we use.

“When I started in the 80s it was all piston-powered aeroplanes.

“Now we use turbo-prop powered aircraft which carry about 1.5 to 2 tonnes of fertiliser. That’s pretty much double the payload.”

“It’s a very skilled job but it’s quite dangerous too.

Changeable weather and strong winds remain a challenge no matter the size of the plane.

“The biggest factor would be wind and exposure. East of Masterton and Pongaroa can get windy in the Westerly.

“You’ve got to work around the weather,” he said. 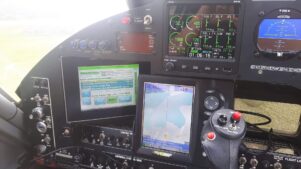 Now: The panel of the Co-op’s latest Air Tractor AT402B with Tracmap GPS and a variable rate application system. PHOTO/SUPPLIED

“Probably half of the airstrips [make us groan],” Arends laughed.

Pilot and area manager for Wanganui Aerowork in Masterton Andrew Denniston agreed with Arends that the weather was the biggest challenge.

It’s all a normal day in the office though he said.

A variable rate system automatically selects when to open and shut the hatch, allowing fertiliser to be applied at different rates across the farm.

Whether farmers wanted to increase grass growth productivity for lambing season or avoid sensitive areas like native bush and creeks, it allows for a more intelligent use of fertiliser.

“It makes it easier and takes the guess work out of it,” Arends said.

“It makes it more accurate and it’s better on the environment.”

Arends said farmers had become more selective around fertiliser use.

From a peak of about 250 aircraft, he now estimates there are only about 50 in use across the country.

He said compliance and civil aviation regulations had made the industry more challenging.

It was also struggling to attract the same interest from the younger generation.

“I think it’s tough. We’re struggling to attract the young guys into the industry,” he said.

Many become helicopter or professional airline pilots instead and those that do go into the industry often take their skills overseas to Canada, Australia or South Africa.

He encouraged those interested in entering the industry to contact topdressing operations to learn more about what the job involved.