Tough times, but the grass is greener The grass is certainly greener and waterways a little fuller following recent rain, but challenges remain for Wairarapa farmers as winter starts to bite.

Wairarapa Federated Farmers president William Beetham said the rain had been a “welcome relief” for the region.

“It’s taken about a week for that grass to get growing. Things are really starting to move which is fantastic.

“But there are still a lot of challenges in front of farmers but they are working really hard to manage these.”

This included finding supplementary feed and long waiting lines to get animals processed at the works.

While many farmers were in a better place than they were a month ago and were feeling buoyant, feeding out and finding alternatives food sources was still important in recovering from the drought.

“Most people are taking the position that the longer they can feed out supplementary feed and grow fresh grass, the better off they will be.”

He said it showed farmers were concerned with animal welfare and prioritising the needs of their livestock, particularly younger animals.

The drought has taken its toll though and Beetham expected there to be lower lambing rates due to current stock conditions. 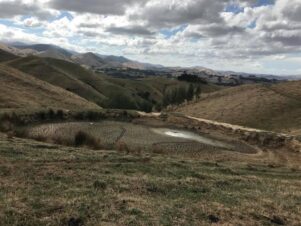 Before: A photo of the McFadzean family’s dam at Glenbrae Farm, near Masterton. PHOTOS/SUPPLIED

“There will be a decrease in lambs born purely for the impact of the drought and less feed being available.”

He said some farmers had tried to mitigate this by not putting rams with young stock if they were not in good condition.

Covid-19 meat processing restrictions, which require physical distancing between plant employees, has added to long waiting times at the works.

Beetham said industry leaders had been working hard to understand what the processing capacity was.

“Farmers have got great info about what to expect from backlogs which best equips them to deal with the challenges.” 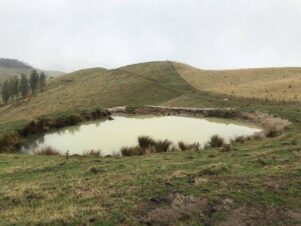 After: One week later after heavy rain fell at the end of March.

Beef and Lamb New Zealand along with the Meat Industry Association estimate it has reduced the industry’s peak processing capacity by 50 per cent for ovine [sheep] and 30 per cent for bovine [beef].

Lamb processing in the North Island was not expected to be further delayed on top of what farmers are currently experiencing – about a four to six weeks waiting list.

There was likely to be little impact on adult sheep, bull and bobby calf processing.

Industry leaders advised North Island farmers add an extra-week delay on top of current backlogs for the processing of prime steers, heifers and cows. This is expected to carry on through to about June.

Beetham said farmers were grateful for the work being done to process stock, including many working through the Easter break.

“Farmers are really grateful for the efforts of the processing sector and the people working on the lines, trying to clear the backlog.”

He said farmers were heartened to see essential workers and those in the industry recognised by the country.

“That’s a fantastic thing to come out of this and really gives heart to the rural community.”

His advice in the interim was “simple”; to keep planning and communicating.

“The more rain and sun we can get before winter is pretty crucial.”

John Roberts, Wairarapa regional coordinator for the East Coast Rural Support Trust, agreed it was important for farmers to keep talking with each other and their advisors.

“It’s all about wellbeing. We are into week three of the lockdown and things are still pretty difficult for farmers,” he said.

“A lot of the conversations we are having with farmers are still about trying to get feed.”

Acknowledging that feed was still difficult to find, he said it was important to build up a foodbank ahead of winter and encouraged supplementary feeding where possible.

“Now that it’s cold in the mornings, the grass is slowing down a bit.”

He suggested farmers use trucking firm contacts, as they may be able to source feed from outside of the region.

“One of the other things we are worried about is our lifestyle block owners and them not having enough feed. We are here for them and their animal welfare needs too.”

Covid-19 lockdown restrictions which had turned many parents into teachers and caretakers had also added to recent stresses.

“It’s a difficult time but it’s important to still have fun on the farm where you can. There’s lots of learning opportunities on the farm.”

It was about being creative with your family, he said.

The main priority was looking after the staff and the animal welfare, he said.

“A lot of guys are keeping people in one role on the farm. It’s the same person driving the tractor, so there’s no vehicle swapping, and it’s the same people covering the night shifts.

“Where possible we’re limiting it to only one person in the cowshed. In rotary shed’s, it’s one person on each side.”

He agreed the drought had made things more difficult.

“Being in Wairarapa, most people plan for a dry period, but this one has dragged on for a lot longer than normal.

“The big concern is food for winter.”

He said it was important for people to make “the big decisions” early on, especially as winter approached.

These included moving to once a day milking or drying cows off.

He urged people to look out for one another as mental health would be badly impacted.

“Farmers are pretty isolated anyway, and now it will be harder.”

WHERE TO GET HELP?