Tony Witinitara ran in the eight-seconds range for the first time in the Super Sedans with a top speed of 156mph. PHOTOS/ALAN PATERSON

The second day of the two-day meeting was cancelled because of bad weather.

“We pulled the pin at 9am. The weather wasn’t looking good and there’s a lot of expense in running a meeting, so it was best to make an early decision.”

However, it was late on Saturday when the action picked up with some very fast times and personal bests set.

Wilton wasn’t certain what brought on the fast times.

“It was unusual, the last half hour on Saturday, the atmospheric conditions must’ve been just right, heaps of stuff was happening. The track was really dialled in and the times started tumbling.” 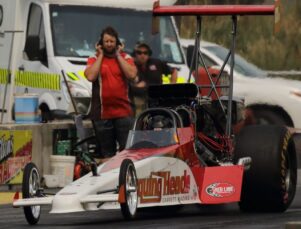 Dwane Garrett had a personal best with 5.991s for the quarter mile.

Dwane Garrett was quickest in his ‘Torquing Heads’ Group One rail, hitting the five-seconds range with his third run.

Garrett was pushed hard by Paraparaumu’s Tamara Silk, who had a fastest time of 6.135s, reaching 223.69mph.

Masterton’s Tony Witinitara also had a meeting to remember, breaking into the eight-seconds bracket for the first time in his 1979 Holden Premier.

Racing in one of the meeting’s biggest classes, the Super Sedans, Witinitara scorched the track in 8.97sec, hitting a top speed of 156.38mph.

Unlike his competitors, who race fibreglass bodied cars with stripped interiors, Witinitara’s Holden has a steel body and a full interior and is fully certified road legal.

The engine is a 540 cubic inch big block Chev, with an F2 Pro-charger and produces 1500 horsepower.

Witinitara, who builds performance cars for a living, said his success has come from the tuning of the car.

“I’m being tutored by American Steve Morris, who is world renowned in drag racing for tuning engines and has the two fastest street legal cars in the USA. We hook up every few weeks and he tutors me on tuning engines.”

In the feature Outlaw 71 class, Grant Briffault from Hamilton was the slickest in his traditional dragster called the Briffo Fed, with a fastest time of 7.388s stopping the speed gun at 178.8mph.

Another driver to get the crowd on their feet was Nelson’s Glenn Collett, who normally races at Meremere in South Auckland.

Collett brought his Fiat Topolino to Masterton and hit the six second bracket, with a time of 6.916s, the fastest in the Competition Car category.

One to look out for at future meetings could be Josh Trybula from Wellington.

The next meeting at the Masterton Motorplex will be the Dragstalgia meeting, featuring the return of the popular Wild Bunch cars on January 4-5.