The topdressing pilot who died in a plane crash in rural Carterton on Friday morning was named yesterday as Andrew Denniston.

The 55-year-old was area manager for Wanganui Aerowork in Masterton.

His brother Adrian, who has been out to the site of the accident, said the extended family has been together over the long weekend.

He said they were trying to “pick up the pieces of what has happened”. 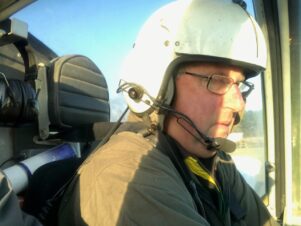 Denniston was “highly valuable to the rural community”.

“My brother was loved by many, many people and his presence will be greatly missed,” Adrian said.

On Sunday a team from the Transport Accident Investigation Commission began their second day of investigating the crash site on a property near Ruakiwi Rd at Kourarau Hill, about 20km southeast of Carterton.

The experienced Ravensdown pilot was flying a Pacific Aerospace Cresco 08-600 aircraft when it crashed at the start of its second run for the morning. The plane went off the airstrip, struck a tree and crashed into the side of a hill. Denniston was dead before emergency services arrived.

Wairarapa Police have handed control of the site to TAIC. The commission team plans to remove the wreckage to its secure technical facility in Wellington this week.

A TAIC spokesman said evidence collection will be broad to support the many routes that the investigation can follow.

“The initial focus is on gathering evidence that could disappear or change,” Simon Pleasants said. “This includes recording the accident scene, mapping the accident site, interviewing witnesses, and making a close inspection of the wreckage.”

Investigators will be interested in a broad range of matters, including securing records for the aircraft, its performance, maintenance, and design, and collection of evidence about the flight plan, the landscape, the weather, the aircraft operator’s safety system and culture.

On the day of the crash Wairarapa Police Area Commander, Inspector Scott Miller said the plane displayed problems going down the runway.

Denniston was “highly valuable to the rural community”, he said.

“Denniston and other fertiliser pilots are local heroes for Wairarapa and this loss of a highly experienced pilot is a loss to the whole community and a terrible loss for the family.”

In an interview with the Times-Age last year, Denniston said, “Really these planes are just airborne tractors. I still love it because of the rush I get out of it. I don’t see it as a job.”

TAIC opens an inquiry when it believes the circumstances of an accident or incident have – or are likely to have – significant implications for transport safety, or when the inquiry may allow the commission to make findings or recommendations to improve transport safety.