Aerial shot of the 1976 floods in Wairarapa. PHOTO/WAIRARAPA ARCHIVE

800 Wairarapa homes at risk of flooding

More than 800 Wairarapa homes are known to be at risk of flooding in a major weather event.

And the cost to homeowners could exceed $40 million in Masterton alone.

As days become shorter and nights longer, residents in flood-prone areas are worried about how winter weather will affect them.

In addition to this, the spokesperson said about 4500 hectares of land and a further 120 properties in “upper Wairarapa” could be affected in a big weather event.

Estimates were not available for Martinborough, Featherston, or Carterton.

Damage in urban Masterton alone would be about $35m, with a further $6.5m in rural damage expected in the region.

This would include infrastructure damage, clean-up costs, and emergency services’ costs.

Intangible damages would vary. The spokesperson said flood risk was a constant reality for Wairarapa, due to geography and the proximity of rivers to properties and towns.

“The Wairarapa towns of Greytown, Featherson, Carterton, and Masterton are situated on river floodplains, notably from the Ruamahanga, Waipoua, Waingawa, Waiohine, Mangatarere, and the Tauherenikau rivers.

“They are thought to be at risk from a large river flood event,” the spokesperson said.

“These townships may also be at risk from smaller watercourses and stormwater flooding. The flood risk in a 50-year return period event and in a greater event are in the combined district plan.”

The regional council spokesperson said floods of a similar size could happen again.

Many in the region are already badly affected when it rains, even without a major flood. 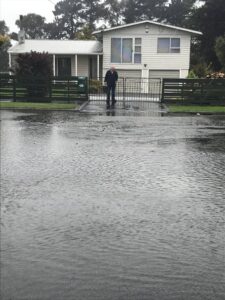 Marcelle Chamberlain’s property in Lansdowne in Masterton is regularly inundated.

“When it rains, it doesn’t even have to rain hard, the water comes into my property. I have a stormwater drain that runs through my property.

“I’ve had the council here on several occasions because when it floods it comes through the garden and under my house. The water then sits under my house,” she said.

Chamberlain said the council had visited her property a few times, but the problem had not been fixed.

In November 2020, her property had flooded badly.

“It comes from up the road; I have no clue where it comes from. It could happen within 20 minutes.

“I’ve stood here and watched the water just rise in my neighbour’s carport.

“There is so much water it just won’t go away. In winter, my lawn has green algae growing on it.

“My kids got really bad asthma, because the water just sits under the house.

“It’s got worse in the last few winters. The infrastructure just doesn’t work.”

Chamberlain had paid for earthworks and drainage to be done, but it had made little difference.

“Expert advice is it needs an area-wide fix, it cannot be house by house. The whole area needs to be fixed.”

She said the area had a natural waterway running through it, which had been filled in.

“A lot of houses are affected. It comes back to the council,” she said.

Chamberlain said a Masterton District Council representative had been to the property after last year’s flooding.

“He said there was a lot of water and they were going to help me fix it. Since then, I have heard not a thing and soon it’s going to be winter,” she said.

“They know the situation and they need to deal with it.

“It runs down through the backyard and down to my shed.

“There needs to be something done. It’s getting worse and worse. I’ve rung the council twice.”

The district council said it was managing the issue.

David Hopman, council assets and operations manager said the council was requiring the developer of the nearby Gordon St development to construct new stormwater drains and an attenuation pond as part of stormwater management.

“An attenuation pond collects stormwater and controls the outflow of that water, avoiding the peak flows that cause flooding.

“In this case, the pond will reduce peak stormwater flows into the [nearby] catchment.

“Drainage improvements are also planned in the area, along with the water and wastewater infrastructure upgrades,” Hopman said.

The regional council is further quantifying regional flood risk so it can be properly managed.

“Greater Wellington is working on updating flood hazard modelling for the Upper Wairarapa, Greytown, and Carterton,” a spokesperson said.

“Work is currently under way with the Greytown and Carterton communities on river plans which incorporate the components of Floodplain Management Plans.

“We are working with the Wellington Region Emergency Management Office to review and improve flood warning and joint response procedures across the region,” the spokesperson said.

The regional council was working with mana whenua, communities, and landowners to manage the risks and impacts of flooding and erosion.

“We do this in a number of ways including giving advice about flood hazard and how to avoid it in new developments, providing flood warning, and working with civil defence on emergency response, managing flood risk to existing development through building stop banks, and river stabilisation works including using rock and planting willows and other erosion stabilising plants.

“Through the Floodplain Management Planning process, we model flood hazard, assess the impact and work with key stakeholders including mana whenua, territorial authorities, and communities to develop solutions.”

River flooding can include structural damage to homes and buildings on the floodplain, erosion to banks, and damage to bridges. Service disruptions are also a possibility if electrical substations are inundated.

If properties remain inundated, then longer term water damage such as rot or mould can happen.

As well as the risk of damage to property, floods are a risk to human life and one of the most significant natural hazards in New Zealand.