After spending the past three years homeless, a Wairarapa theatre company hopes to celebrate its centenary in a new permanent base.

Greytown Little Theatre would submit a tender to buy the St John Hall at 73 Main St, where it had already put on several productions.

GLT president John Gilberthorpe said that although the hall had served the company well, the company wanted to make modifications to the space, which would only be possible if they owned the building. 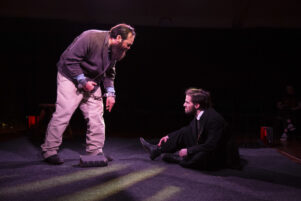 “We really are a bit lost without a permanent home,” Gilberthorpe said.

“After 100 years, we’re at a turning point, and we’re trying to find ways to move forward.”

GLT had abandoned its theatre at 68 Main St after a seismic report found the site was rated at 15 per cent of the building code.

Since then, the company had investigated the option of purchasing council-owned property at the south end of West St. However, that project was derailed when covid-19 struck.

Despite the outbreak of covid-19, GLT had still put on some studio productions at the St John Hall in the last year.

Other community groups and events made use of the hall, such as the Greytown markets.

Gilberthorpe said if GLT owned the hall, it could make changes that would benefit all users.

“We want to maintain it for community activities and for the people who are using it already, as well as us being there more permanently.”

The company’s longer-term plans would have the hall brought up to building code compliance and extended to accommodate a new kitchen and toilets.

“We want to give the building new life for the years ahead to meet the community’s needs and our own needs.”

If successful in their purchase, one of the first items on the company’s list would be to install wall drapes that could be drawn to transform the hall into a performance space. Gilberthorpe said local and regional St John representatives had shown support for GLT’s bid to buy the hall, but the charity’s Priory Trust Board had decided to seek public tenders.

“We’ve decided to push on and put a tender in because we’ve already done so much work,” Gilberthorpe said.

GLT was now canvassing the community for support and would consider starting a petition to back its tender.

St John general manager of infrastructure David Thomas said the tender process would likely begin in October, although marketing timelines would depend on alert level restrictions.

“St John aims to have the sale of St John hall in Greytown concluded by December 2021. However, a timeline will be dependent on any conditions purchasing parties may place in their offers,” Thomas said.