The rise of our hospice It’s hard to imagine Wairarapa not having a hospice.

But the threat of this was very real last decade.

The shock closure of Wairarapa’s Hospice, run by Te Omanga, came after a 2006 Wairarapa District Health Board review found there were “gaps and duplications” in the palliative services offered in the region.

When the Wairarapa District Health Board took over responsibility for palliative care in 2008, Te Omanga Hospice’s specialist role was, and still is, provided from Hutt Valley.

The closure and loss of the hospice base drew an emotional response from the community.

This is when Hospice Wairarapa arose, officially opening its Renall St premises in 2010.

It entered a Memorandum of Understanding with the DHB whereby hospice services were reintroduced to Wairarapa to supplement clinical services under the DHB’s palliative care service Kahukura.

Next week is Hospice Awareness week, and the Wairarapa Midweek is taking a look back at how Hospice Wairarapa rose from the ground to bring terminally-ill people quality of life.

This is the first in a 10-part Midweek series bringing awareness to the community about Hospice Wairarapa in an effort to increase support for the charity and the services offered. The official opening of Hospice Wairarapa in May, 2010. PHOTO/FILE

Her involvement with hospice began 19 years ago when it was Te Omanga Hospice in Wairarapa.

“My father died in Christchurch at 61 from cancer and because I lived here with my young family, I couldn’t get down to see him as often as I  wanted,” she said.

“The palliative nurses were so good in supporting my dad, and so my sister and I decided we wanted to give something back.”

She and her sister started with Te Omanga Hospice on Lincoln Rd, Masterton, as gardeners.

“When Te Omanga didn’t get the contract for palliative care with the local DHB, I decided we needed to keep the hospice philosophy going.

“Hospice care isn’t just about physical care, it’s about emotional care, spiritual care, social care, ensuring that the focus of control goes back to the patient.

“I set up meetings across Wairarapa at the town halls . . . and long story short, more than 3600 people signed a petition to keep hospice care going in our community.

“I shoulder-tapped people and we put a board together.”

After registering as a charity, the board had enough funds saved from charity wine auctions to get a loan to buy the Renall St premises they are in today.

After six years on the board, Suzie applied for the job of manager and was successful in her application.

There are only two fulltime staff members, six part-time, and there is also a network of more than 130 volunteers. A common misconception about Hospice Wairarapa is that it has an in-patient unit on the hospice premises.

In fact, there has never been a hospice with beds in Wairarapa.

Much like today, Masterton’s Te Omanga Hospice that preceded Hospice Wairarapa did not have beds either – however it was in their long-term plan and that is the reason the first Charity Wine Auction was held in Martinborough in 2007 under the Te Omanga banner.

But, providing an in-patient service has always been a goal for Suzie.

“We’ve had an extension built and we have three rooms down the end, which at the moment are offices.

“The vision I have is that we will eventually turn those into two 24/7 respite beds so people can come in and stay for respite, rest, or tweaking their medication.

“The front room will become a last day’s bed so that people, unable to die at home for whatever reason, can use the space for family and whanau to be with them.

“But we can’t afford it at the moment.”

Suzie said with funding levels, having an in-patient unit was not feasible.

“I mean, we could open for 12 months, but the cost of staffing . . . well you need two registered nurses and a healthcare assistant, plus you need a doctor to come and sign off meds.

“But the only option people have if they can’t die at home, and with the best will in the world this is not always possible, is to die in a hospital bed or an aged care facility.

“We’ve worked with the DHB to provide kits for those who are actively dying in the hospital to try to turn the room into more of a home-like environment, but the ultimate goal is to be able to provide a service here.

“Dying is a social event, not just medical – we need to remember that.”

The Wairarapa DHB does not deem it “clinically safe or financially sustainable for 24/7 high specialty level care for a very small number of patients”.

At any given time, there are about 120 people in the Wairarapa Hospice care network, however this includes patients and their family.

What Wairarapa Hospice does offer

Although Hospice Wairarapa does not have the means to offer an in-patient unit, there are many other things it does to give quality of life to Wairarapa people living with a terminal diagnosis.

“We do bucket lists which are huge fun,” Suzie said.

“We say to people, you tell us what you want to make the rest of your life – however long or short it may be – special.

“As long as it’s not breaking the law, we’ll do our absolute best to pull off whatever it is they want to do.

“We’ve sent people up in a helicopter, we’ve sent a family to spend time with their grandchildren at Castlepoint, we’ve done all sorts.

“It’s fun and it’s a great reminder for each of us to really look at what we are doing ourselves.

“You never know when you are going to get that bit of bad news.”

She said life was short and people needed to live their dreams in their own way.

“Every day I come to work, I’m really lucky to be reminded of what is important today.

“The difficult things we deal with in our own lives is nothing compared to what these patients deal with – and yet, they are full of hope – not that they are going to live and get through their illness – but that the rest of their journey will bring positive things and moments of joy.

“That’s an incredible strength that human beings can pull from within.”

In this Giving for Living series, the Midweek will spotlight these services offering further insight.

Palliative care recognises that there is no cure for a person’s condition and the priority therefore is to ensure patients get the most out of the limited time they have left. 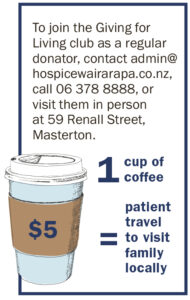 The patients’ physical, emotional, spiritual, and social concerns are taken into consideration.

In Wairarapa, there are six facilities which provide hospital level palliative care.

“The Wairarapa palliative care service is not just provided by one agency, but is a network of a number of agencies, each with a specific role, but working together.

“If just one agency was deemed to provide palliative care in Wairarapa, as in the past, there is a risk of an insular and segmented system which would lack the strengths achieved by a combined approach across the total Wairarapa palliative care service.” Suzie says Hospice Wairarapa is able to provide its service to the Wairarapa community because of the generosity of the people.

“We can only do this because our community supports us.

“We have a contract with the Government that gives us about $10,500 a year.

“We have our hospice shop, which is really important, and we ask that people, if they have things they no longer want that are in good condition, please send them to the hospice shop because we can turn your second-hand goods into first class care.

“That gives us an income, but we are constantly searching for ways to pay for bucket lists, to pay for night support nursing, which we have a contract to provide, to pay for massage and podiatry, counselling, sending our patients out on an out-and-about adventure where we give them lunch and they can go and do something special.

“We’ve got rates and insurances to pay, electricity, there’s a lot.”

“If 100 people pledged $5 a month, that would pay for our day respite programme.

“A donation of $60 a month will pay for a counselling session, $40 will pay for a gentle touch massage, $37 pays for the printing of a patient biography, $15 pays for travel to visit three families.